Iran has the know-how to produce a nuclear bomb and may already have tested a detonation system small enough to fit into the warhead of a medium-range missile, according to confidential papers.

The “secret annexe” to this year’s International Atomic Energy Agency (IAEA) report on Iran summarises information submitted by intelligence agencies about the country’s work on warheads, detonators and nuclear fuel enrichment. It is based partly on evidence thought to have been smuggled out of Iran by the wife of a spy recruited by German intelligence. 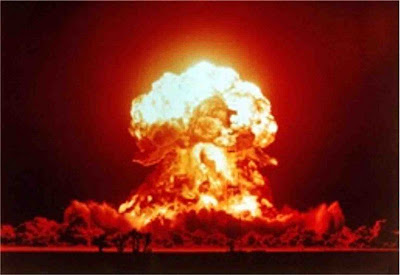 The papers conclude that Iran already “has sufficient information to be able to design and produce a workable implosion nuclear device”, or atom bomb.

The finding goes beyond America’s public stance and may complicate its efforts at talks in Geneva to prevent Iran acquiring nuclear weapons.
General James Jones, President Obama’s National Security Adviser, said yesterday: “Whether they know how to [build a bomb] or not is a matter of some conjecture. What we are watching is what is their intent — and we have been worried about that intent.”

The secret report, excerpts of which were posted on the internet at the weekend, matches British and French estimates of Iran’s nuclear progress. Its findings are tentative and not endorsed by the IAEA’s own chief, Mohamed ElBaradei, who emphasised last month that the agency had “no concrete proof” of a military dimension to Iran’s programme.

France and Israel accused the IAEA of suppressing the annexe on publication of its report on Iran last month.

The report, Possible Military Dimensions of Iran’s Nuclear Program, presents evidence that Iran has done extensive research and testing on how to fashion the components of a nuclear payload to be delivered by the Shahab 3, a medium-range missile capable of hitting Israel and parts of southern Europe.

American intelligence agencies concluded in a 2007 report that Iran had suspended its research into making a nuclear warhead in 2003 — an assessment rejected by Britain and France.

“We are not convinced they stopped then,” a European official told The Times. “We believe they know what they need to know to make a bomb. The question is whether they take the political decision to do so.”

Warhead design represents only part of the complex process of making nuclear arms. Experts say that Iran has already mastered the hardest part, enriching uranium to be used as nuclear fuel, for civilian and military purposes alike.

Dr ElBaradei secured access yesterday to the second of Tehran’s uranium enrichment sites after its dramatic public unveiling by President Obama at the Pittsburgh G20 summit last month. America believes that the facility, hidden inside a mountain near Qom, may be one of a series of clandestine sites, a charge that Tehran vehemently denies.

The site’s disclosure has been credited with forcing Iran’s hand at the talks in Geneva last week. Iran agreed to open the plant, enter further negotiations and send most of its known enriched uranium stockpiles abroad for reprocessing, removing it from potential redirection to a weapons programme.

Dr ElBaradei declared a “shifting of gears” in Iran’s confrontation yesterday, announcing an agreement for inspectors to visit the Qom site on October 25. That, however, is some days later than the two-week deadline laid down by Mr Obama. Iran is due to return to talks with six leading world powers before the end of the month but after inspectors have gained admittance to the site.

Speaking at a press conference in Tehran, Dr ElBaradei reiterated that the IAEA “has no concrete proof of an ongoing weapons programme in Iran” but said that it did harbour “concerns about Iran’s future intentions”.

America is determined to frame its high-risk overture to Tehran as the best way of preventing Iran acquiring nuclear weapons. That strategy could be undermined by evidence that it is already close to building them.

Susan Rice, the US Ambassador to the UN and a close ally of President Obama, refused to be drawn on the IAEA report yesterday, focusing instead on the Geneva process. After “years of drift”, the West and Iran were “in a different place now”, she insisted. “The onus is very much on Iran. Time is short. We’re not interested in talking for talking’s sake.”

Suspicion that Iran’s newly revealed nuclear site was meant for military purposes was heightened by its location, at least partly inside a mountain and within a military base. Iran has said that it built the facility to protect it from potential aerial bombing and to ensure continuity of its nuclear activities in case of an attack.

Although Tehran has always insisted publicly that its nuclear enrichment programme is for civilian purposes, Ayatollah Ali Khamenei, the country’s Supreme Leader, is alleged to have said as early as 1984 that “a nuclear arsenal would serve Iran as a deterrent in the hands of God’s soldiers”.

The IAEA said earlier this year that Iran had probably produced more than 1,000 kilograms of low enriched uranium — enough, if further enriched, to provide the fuel for a single bomb. Dr ElBaradei told a private meeting of the agency’s board last month that if the intelligence on which the annexe was based was genuine, “there is a high probability that nuclear weaponisation activities have taken place — but I should underline ‘if’ three times”.

Dr ElBaradei’s seven-year tenure at the UN’s chief nuclear watchdog ends next month. He will not be missed by foreign policy hawks in the US who accuse him of acquiescing in years of nuclear prevarication by Iran. “Thank goodness he’ll be gone by the end of the year,” John Bolton, the former US ambassador to the UN, said yesterday

The demise of the dollar

In the most profound financial change in recent Middle East history, Gulf Arabs are planning – along with China, Russia,...