by Toby Harnden in Washington 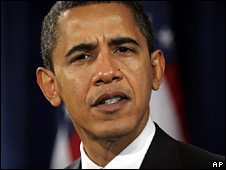 Here is the top 10 list of most glaring examples of Mr Obama falling short in key areas he trumpeted during his campaign.

1.PROMISE BROKEN. Mr Obama said he would “not sign any non-emergency bill without giving the American public an opportunity to review and comment on the White House website for five days”. But the “sunlight before signing” promise has already fallen by the wayside with Mr Obama signing three major bills without public scrutiny.

2.PROMISE BROKEN. Mr Obama repeatedly said he would negotiate health care reform in televised sessions broadcast on C-SPAN, the public service network. Instead, he his approach has been no different from his predecessors, holding talks behind closed doors at the White House and Congress.

3.PROMISE BROKEN. Mr Obama solemnly pledged that “no political appointees in an Obama-Biden administration will be permitted to work on regulations or contracts directly and substantially related to their prior employer for two years”. In practice, Mr Obama has granted several waivers to this rule, allowing lobbyists to serve in the top reaches of his administration.

4.PROMISE BROKEN. Mr Obama said he would end income tax for the elderly making less than $50,000 per year, thereby eliminating taxes for seven million of them. This has not been part of his economic stimulus bill, his first budget outline or any legislation proposed by the White House.

5.PROMISE STALLED. On taking office, Mr Obama announced with great fanfare that the Guantanamo Bay prison camp would be closed within a year of his inauguration on January 20th. Defence officials now concede that this self-imposed deadline will not be met.

7.PROMISE BROKEN. Mr Obama said that in 2009 and 2010 “existing businesses will receive a $3,000 refundable tax credit for each additional full-time employee hired”. Democrats on Capitol Hill opposed this and Mr Obama has quietly abandoned the proposal, omitting it from his list of requirements for draft legislation.

8.PROMISE BROKEN. During the campaign, Mr Obama promised that “as President I will recognise the Armenian genocide” carried out by the Ottoman Empire after 1915. Once in office, he travelled to Turkey and made no mention of genocide. In a statement in April on the memorial day for the genocide he spoke of the “heavy weight” of history and the “terrible events ” of the period but failed the use the g-word.

9.PROMISE SIDELINED. As a candidate, Mr Obama highlighted his support for abortion rights, stating he would back this up “by passing the Freedom of Choice Act as president”. At a press conference marking his first 100 days, Mr Obama said this was “not my highest legislative priority” and that it was important to “focus on those areas that we can agree on”.

10. PROMISE SIDELINED. Mr Obama promised to end warrantless wiretaps on the domestic communications of Americans and to “update the Foreign Intelligence Surveillance Act to provide greater oversight and accountability”. So far, he has taken no action.

In Case You Missed It:  Homeless Camps In Portland, Oregon Are So Bad That Some People Are Selling Their Houses And Leaving (VIDEO)
Posted in Tyranny and tagged Campaign, Election, Obama.

By Daniel Pipes National Review Online October 9, 2009 “He won what?” is the first universal reaction. And second, at...