Sept. 28 (Bloomberg) — Treasury Secretary Timothy Geithner’s appearance in Congress last week to explain how President Barack Obama would overhaul financial regulation elicited the most striking sign yet that the wheels have come off the administration’s economic-policy team.

The White House had proposed, and Geithner was ready to defend, such a radical expansion of government power that even Barney Frank, the ultra-liberal congressman from Massachusetts, felt compelled to object that it went too far.

When Barney Frank thinks that you are too liberal, you better check your medications. 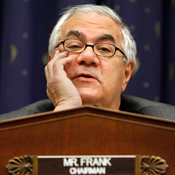 It would create a new government body, the Consumer Financial Protection Agency (CFPA), which would “write rules, oversee compliance and address violations by non-bank providers, as well as banking institutions.” This agency would have to enforce its rules and would, according to the Obama design, be able to go after any firm that offers credit to consumers.

Such an unprecedented expansion of the reach of government was too much for Frank, chairman of the House Financial Services Committee. In a letter to his colleagues a day before Geithner’s testimony, Frank proposed rolling back much of Obama’s planned intrusiveness.

“Merchants, retailers and other non-financial businesses will be excluded from the regulation and oversight of CFPA,” Frank wrote. “That means that merchants and retailers can continue to give their customers tabs and layaway plans without becoming subject to a new layer of regulation. Also, doctors and other businesses that bill their customers after a service is provided, including telephone, cable, and internet providers, will be excluded.”

It is extraordinary that the president’s original proposal was so broad that it elicited such a response from a member of his own party.

Obama’s Democratic friends in Congress were less negative about the second part of his proposal, which would enact new regulations for firms that pose a systemic risk for the U.S. economy. That part has even less merit than the first.

Most observers agree that a key problem facing financial regulators is the emergence of firms that are “too big to fail.” Such firms have an implicit guarantee from the U.S. government that encourages them to take big risks. Uncle Sam has them covered on the downside.

The problem has a simple solution that has been elucidated well by my colleague Allan Meltzer, who recently said, “If a bank is too big to fail, it’s too big.” Government regulators should seek policies that encourage the emergence of a market that consists of many smaller firms.

A less palatable alternative would be to identify firms that are too big to fail and expose them to more oversight. This approach has significant drawbacks.

Once there is a public list of firms that are too big to fail, they will have an enormous competitive advantage. Since government is backstopping them, they will be able to borrow at lower interest rates, just as Fannie Mae and Freddie Mac have for years. Also, regulators will inevitably be unable to regulate these supersized firms well enough to stave off a future disaster.

In his testimony, Geithner leaned toward this extra- regulation approach, and in a truly bizarre fashion.

First, he reiterated the administration’s plan to crack down on too-big-to-fail firms: “We will impose tough rules on our largest, most leveraged and most interconnected firms. We will require these firms to hold more capital to protect the system in the event of the firm’s failure.”

He then reassured lawmakers that government would have “no fixed list” of firms that wouldn’t be permitted to fail.

But the promised harsher capital requirements would make it clear to the market which firms have been deemed too big to fail. And what’s to stop firms from announcing to everyone that they have such a designation? Will the Treasury Department remain silent if a bank falsely claims membership in that club?

Just as implausibly, Geithner said firms deemed systematically important will have “no guarantee of extraordinary governmental assistance in the event of financial distress.” In other words, they could be allowed to fail.

Hogwash. The administration’s designation would be seen, correctly, as a promise of a safety net.

President Obama chose to begin the health-care debate without producing an explicit proposal of his own. Now we know why.

(Kevin Hassett, director of economic-policy studies at the American Enterprise Institute, is a Bloomberg News columnist. He was an adviser to Republican Senator John McCain of Arizona in the 2008 presidential election. The opinions expressed are his own.)

By Salena Zito A poll of opinion polls shows Americans' attitudes are changing rapidly. They are less and less thrilled...