France is to adopt a series of measures to ‘reaffirm pride’ in the country and combat Islamic fundamentalism.

They include everybody receiving lessons in the nation’s Christian history and children singing the national anthem.

He called for all recent arrivals to be monitored by ‘Republican godfathers’, charged with helping immigrants to integrate better.

His proposed measures contrast sharply with the situation in Britain where ‘citizenship education’ centres on multicultural diversity. 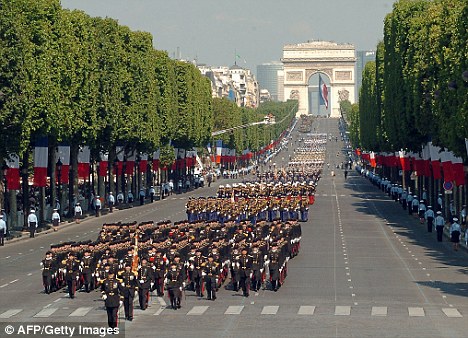 M Besson, who was born in the former French protectorate of Morocco, suggested a debate on national identity’ entitled ‘What does it mean to be French?’

He also reignited the debate about face and body-covering Muslim veils, saying they should definitely be banned.

As well as providing civic lessons for adults – including classes about the country’s Christian history and liberal political institutions – the government will encourage school children to sing the national anthem at least once a year.

His proposed measures contrast sharply with the situation in Britain where ‘citizenship education’ centres on multicultural diversity and the European Union, while ‘God Save The Queen’ is not even taught in schools.

In an interview broadcast on national TV, Mr Besson said : ‘It’s necessary to reaffirm the values of national identity and the pride of being French.

‘I think, for example, that it would be good for all young French people to have the chance to sing The Marseillaise at least once a year.’

Making clear that radical Islam was a threat, Mr Besson said: ‘In France, the nation and the republic remain the strongest ramparts against … fundamentalist tendencies. France is diversity, and France is unity.’

Mr Besson defended a decision to send illegal Afghan immigrants – all of them Muslim – back to Kabul on charter flights organised in conjunction with the British government last week, saying there would be many more.

More than 21,000 people have been deported from France this year – with 27,000 the ultimate target, said Mr Besson.

He also reignited the debate about face and body-covering Muslim veils, saying they should definitely be banned.

‘For me, there should be no burqas on the street,’ said Mr Besson. ‘The burqa is against national values – an affront to women’s rights and equality.’

But Mohammed Moussaoui, a prominent French Muslim leader, said debates like the one about the burqa were stigmatising the country’s entire Muslim community, which at some five million is the largest in western Europe.

In Case You Missed It:  Here’s what you need to know about chlorine dioxide (ClO2), the “universal antidote”
Posted in Freedoms, Terrorism and tagged Besson, Campaign, France, Islam, Nicolas Sarkozy, Terrorism.

McChrystal issued his report 8 weeks ago, when will Obama issue a decision? Posted by Dan Spencer Obama spent the...