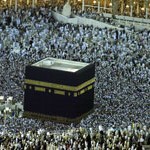 Ka'aba a Rock Muslims Worship in the yearly Hajj Pilgrimage

For “2012,” Emmerich set his sites on destroying the some biggest landmarks around the world, from Rome to Rio. But there’s one place that Emmerich wanted to demolish but didn’t: the Kaaba, the cube-shaped structure located in the center of Mecca. It’s the focus of prayers and the site of the Hajj, the biggest, most important pilgrimage in Islam.

“Well, I wanted to do that, I have to admit,” the filmmaker told scifiwire.com. “But my co-writer Harald [Kloser] said, ‘I will not have a fatwa on my head because of a movie.’ And he was right.”

Emmerich went on: “We have to all, in the western world, think about this. You can actually let Christian symbols fall apart, but if you would do this with [an] Arab symbol, you would have … a fatwa, and that sounds a little bit like what the state of this world is. So it’s just something which I kind of didn’t [think] was [an] important element, anyway, in the film, so I kind of left it out.

Traditionally, a fatwa has meant religious opinion by an Islamic scholar or imam. The term has gained currency in the West after Iran’s Ayatollah Khomeini issued a death sentence in the form of a fatwa against British author Salman Rushdie for alleged blasphemies in his book “The Satanic Verses” in 1989. As a result, the Indian-born writer was forced into hiding for most of the ’90s.

Emmerich has no qualms about wrecking other major landmarks, however. The massive dome of St. Peter’s Basilica in the Vatican rolls on top of a crowd of churchgoers. The huge Christ the Redeemer statue that looms over Rio de Janeiro disintegrates. And, of course, the White House gets crushed when a wave drops the aircraft carrier John F. Kennedy on top of it. In a since the terrorist have won this battle, we fear the retribution of intolerance and have to walk on eggshells around Islamic followers and fear the consequences.

"The institution of marriage has been preserved in Maine and across the nation," said Frank Schubert, the chief organizer for...