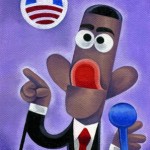 As stated before, the majority of Americans self describe as Conservative.

According to GALLUP, 40% of Americans (up from last year) are Conservative, 36% are moderate, and only 20% are liberal.

Last year when elected 43% of Americans thought he was a LEFTIST. Now, only 1 year later that number has JUMPED TO 54%

“A majority of Americans now see President Barack Obama as governing from the left. Specifically, 54% say his policies as president have been mostly liberal while 34% call them mostly moderate. This contrasts with public expectations right after Obama’s election a year ago, when as many expected him to be moderate as to be liberal.”

Americans, thankfully, are not liberal loons. The voters who voted for the cool, supposedly moderate, Obama are waking up to this disaster.

President Obama is not enjoying the same broad appeal and centrist image that he did in the afterglow of his election last November. Although a majority of Americans continue to view him favorably, this percentage has declined. The common perception that he would govern as a moderate has given way to a heightened belief that Obama’s policies are mostly liberal. (Interpreted in the light of Americans’ generally conservative leanings, this could be a problem for Obama politically.) And whereas in April most Americans believed he was sticking to the promises he made during the campaign, fewer than half now say that’s the case.

These findings are reinforced by Obama’s subdued job approval rating, which has been consistently tracking in the low 50s over the last several months. They also conform with Gallup findings reported earlier this week indicating that, compared to a year ago, Americans have generally lost hope that Obama can heal political divisions in the country or control federal spending, and are less optimistic about his ability to accomplish a number of other important goals.

As long as Obama’s overall job approval rating remains above 50%, these setbacks would seem to be tolerable in a political sense — perhaps indicating nothing more than the cost of bold leadership at a difficult time for the country. But should he fall well below that important threshold in public support over a sustained period, the findings may point to weaknesses Obama may need to address.

Video: Meet the Foreign Press: Are They Objective?