The true rate of unemployment for October 2009 may be 22.1 percent, not the 10.2 percent reported by the Bureau of Labor Statistics, Jerome Corsi’s Red Alert reports.

Unemployment at 22.1 percent, if accurate, would be at numbers not seen since peak unemployment during the 1973 to 1975 recession.

Economist John Williams, publisher of ShadowStats.com, estimates that the peak of unemployment in nonfarm unemployment in the Great Depression of the 1930s would, by his methodology, have registered at 34 to 35 percent in 1933.

So, how does the Obama administration get away with reporting the lower unemployment percentage? 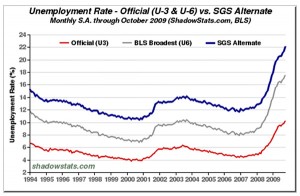 Corsi explained that the Clinton administration changed the way BLS calculates unemployment statistics by excluding “discouraged workers,” those who had given up looking for a job because there were no jobs to be found.

Since the Clinton years, discouraged workers looking for a job for more than one year are not counted as “unemployed” because they are considered to have dropped out of the labor force.

The BLS still includes in “U6 Unemployment” calculations short-term discouraged workers, as long as they have been looking for a job less than one year.

With millions of jobs outsourced to China and India under free-trade globalism, the dollar weakness that accompanies most recessions is not stimulative, he explained, largely because the U.S. has lost so many manufacturing jobs that are never returning to its shores

“The stock-market bubble will most certainly burst when interest rates rise, as they inevitably will,” Corsi wrote, “both to fight the increasing risk of hyperinflation and to maintain the needed incentive for foreign nations to lend the U.S. Treasury the hundreds of billions of dollars monthly that will be needed to float yet another $1 trillion Obama administration federal budget deficit in 2010.”

In Case You Missed It:  Media Analyst Says Joe Biden Is Governing Like A Dictator By His Own Definition
Posted in Financial, Tyranny and tagged Financial, Obama, Unemployment.

From Newsmax.com: Israel's Mossad spy agency hacked a Syrian official's computer to uncover information about a nuclear facility in Syria...