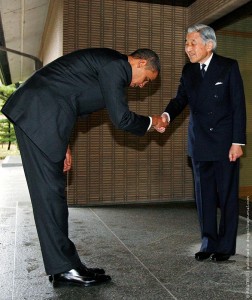 How low will the new American president go for the world’s royalty?

This photo will get Democrat President Obama a lot of approving nods in Japan this weekend, especially among the older generation of Japanese who still pay attention to the royal family living in its downtown castle. Very low bows like this are a sign of great respect and deference to a superior.

To some in the United States, however, an upright handshake might have looked better. Remember Michelle Obama casually patting Britain’s Queen Elizabeth on the back during their Buckingham Palace visit? America’s royalty tends to make movies and get bad reviews and lots of money as a sign of respect.

Obama could receive some frowns back home as he did for his not-quite-this-low-or-maybe-about-the-same-bow to the Saudi king not so long ago. (See photo here) 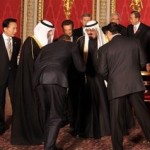 Akihito, who turns 76 next month, is the eldest son and fifth child of Emperor Showa, the name given to an emperor and his reign after his death.

Emperor Showa is better known abroad by the life name of Hirohito. He became emperor in 1925 and died in 1989, the longest historically-known rule of the nation’s 125 emperors.

Hirohito presided over his nation’s growth from an undeveloped agrarian economy into the expansionist military power and ally of Nazi Germany of the 1930’s.

And, later, Japan became a global economic giant. Hirohito, along with Prime Minister Hideki Tojo, who authorized the 1941 attack on Pearl Harbor, were much reviled abroad during World War II.

Historically, debate has simmered over how much of a political puppet Hirohito was to the country’s military before and during the war.

Even after Democrat President Harry Truman ordered the two atom bombs dropped on Hiroshima and Nagasaki in the summer of 1945, there were strong forces within Japan that wanted to continue to fight the Americans in the spirit of kamikaze suicide pilots.

But Akihito’s father went on national radio, the first time his subjects had ever heard Hirohito’s voice, and without using the inflammatory word “surrender,” pronounced that the country must “accept the unacceptable.” It did.

As the conquering Allied general and then presiding officer of the U.S. occupation, Gen. Douglas MacArthur, decided to allow Japan to keep its emperor as a ceremonial unifying institution within a nascent democracy.

Tojo, on the other hand, was hanged. 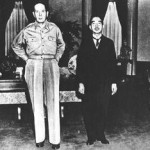 MacArthur treated Emperor Hirohito respectfully but, as his body language in this black and white postwar photo demonstrates, was not particularly deferential.

(But then MacArthur was not known as a particularly deferential person, as Truman discovered just before firing him later. But that’s another war.)

Akihito was born during Japan’s conquering of China and was evacuated during the devastating American fire-bombing of Tokyo, which was built largely of wood in those days.

The future emperor learned English during the U.S. occupation, but, inexplicably, his father ordered that his oldest boy not receive an Army commission as previous imperial heirs always had.

Akihito assumed the throne on Jan. 7, 1989. Within weeks he began a series of formal expressions of remorse to Asian countries for Japan’s actions during his father’s reign. In 2003, he underwent surgery for prostate cancer.

In 1959, Akihito married Michiko Shoda, the first commoner allowed to enter the Japanese royal family. That was two years before the birth of Akihito’s future presidential guest, Barack Obama.

Joe Biden was already 17 by then. But he wasn’t a senator.

In Case You Missed It:  Eric Trump Says Safe Cracked Open By FBI Was Empty (VIDEO)
Posted in Tyranny and tagged Japan, Obama.

Posted by Erick Erickson Today Barack Obama is going to announce that the terrorist mastermind of September 11th, Khalid Sheikh...