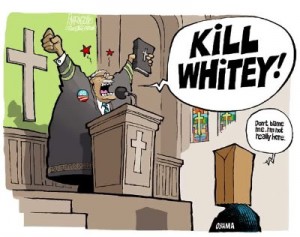 Mark Hyman– The very next paragraph is going to make the nut jobs on the far left excitable beyond belief. I am not referring to all Democrats or even a majority of liberals. I am singling out the “they’ve-lost-all-touch-with-reality” crowd. This includes Media Matters for America led by the admitted hit-and-run, drunk-driving serial liar. The group includes the unshaven, bathrobe-clad unemployed who live in their mother’s basement and are devout followers of MoveOn.Org. It is also the bitter, aging spinster working at the New York Times, the morbidly obese documentary film maker, and cable TV news’ resident drama queen who hosts MSNBC’s Countdown. They are about to simultaneously suffer from brain aneurisms. So without further delay, I’ll say it.

When people who voted for Obama in 2008 — including registered Democrats — start speaking in normal conversational voices at dinner parties, neighborhood gatherings and PTA meetings that the over-inflated ego from Chicago has it “in for America,” then it’s clear most reasonable people have reached the same conclusion.

The central conviction of Obama’s ideology is that America is guilty of limitless moral failures and is the chief architect of the world’s ills. Obama has boundless enmity for America, its key institutions, and its longtime allies. Consider these facts.

The 30-years of Obama’s post-adolescent life are radical by any measure. First, he grew up listening to the ramblings of committed Communist Frank Marshall Davis. It had such a profound effect on him that he wrote fondly of Davis in his first book. In fact, that book is replete with statement after statement about how the U.S. is deeply flawed. Most Americans believe in American exceptionalism. Not so with Obama.

Patriotic Americans would not have listened to the bigoted, anti-Semitic, hate-America rants of a fringe religious leader for 20 seconds let alone for 20 years. Yet, Obama who admitted he attended services at Trinity United Church at least twice a month for two decades called Jeremiah Wright his mentor and his moral sounding board.

Nor would most Americans cultivate a close friendship with an admitted domestic terrorist and his wife whose most notable life’s accomplishments were to set off bombs that killed and maimed innocent people.

Joining Al Sharpton and Jeremiah Wright in organizing attendance at Nation of Islam leader Louis Farrakhan’s 1995 march on Washington is beyond imaginable. Especially after Farrakhan demonstrated public support for Colonel Muammar Qaddafi during the Libyan Leader’s most bellicose years against the U.S., which included Libyan complicity in numerous terrorist attacks.

Obama’s view of America in national security and foreign affairs is profoundly disappointing to say the least.

Americans overwhelmingly view the men and women who saved Europe and the Far East during World War II as comprising the Greatest Generation. By his comments and actions, President Obama obviously thinks otherwise.

Obama did not honor American greatness on the 60th anniversary of the Berlin Airlift while on his first European trip. Instead, he accused “America [of having] shown arrogance and been dismissive, even derisive” toward its European allies.

He also denigrated the accomplishments of the American G.I. during World War II in the Pacific theater when he offered a thinly veiled apology for the U.S. having dropped the A-bomb on Hiroshima and Nagasaki. Those acts brought the war to a swift conclusion, perhaps saving hundreds of thousands of lives when it appeared Japan was prepared to wage an island-by-island battle to the last man.

In a matter of weeks last spring, Obama gave deference to a variety of belligerent leaders while stiff-arming longtime American allies. First, he called for closer relations with Cuba while ignoring that nation’s long list of continuing human rights abuses. Then he warmly welcomed Venezuelan dictator Hugo Chavez at an Organization of American States summit.

Next, he failed to respond and set the record straight after Nicaragua’s Communist leader Daniel Ortega listed alleged U.S. crimes and atrocities during a nearly one-hour rant at the OAS meeting. It is unsettling that in his own remarks Obama incorrectly claimed the OAS has 36 members rather than the actual 34. Ortega and the hemisphere’s other Socialist leaders claim the OAS would include 36 members if Cuba and an independent Puerto Rico were allowed to join. Mere coincidence or Freudian slip?

Immediately following the OAS embarrassments, Obama ignored a request from Israeli Prime Minister Benjamin Netanyahu to meet. Obama would repeat this snub six months later before agreeing at the last moment to meet Netanyahu after the Israeli leader was en route the U.S.

In his speech before the Muslim world, Obama made the patently absurd claim of equivalency between the status of displaced Palestinians and the slaughter of millions of Jews during the Holocaust. His claim that 7 million Muslims live in the U.S. is a figure inflated by as much as 700%.

In an earlier speech, Obama claimed that the U.S. is not a Christian nation, which is at odds with the fact that 79% of Americans self-identify as Christians and the nation’s founders were devout Christians.

In less than six months in office, Obama apologized for Guantanamo Bay; for alleged mistakes committed by the CIA; for U.S. policy in the Americas; for America’s history of slavery; for “sacrificing [American] values;” for “hasty decisions” in the war on terror; for “America’s standing in the world;” for American errors in foreign policy; and for U.S. relations with the Muslim world.

He pronounced Iran’s pursuit of nuclear technology acceptable and he warned Netanyahu against targeting Iran’s nuclear facilities. Obama’s approach to Iran is eerily similar to that of Jimmy Carter, whose actions contributed to the fall of that nation into the control of Islamic radicals.

This summer, the door to greater individual freedoms in Iran was firmly closed shut when Obama announced the U.S would not meddle in Iran’s election and he offered no encouragement to democracy activists who protested the obviously stolen elections. His silence was deafening when regime security agents savagely attacked and killed countless Iranians who took to the streets.

In contrast to his deference to anti-American leaders such as Mahmoud Ahmadinejad, Hugo Chavez, and Daniel Ortega, Obama strong-armed Netanyahu on key Israeli matters. In addition to snubbing the Israeli Prime Minister’s requests to meet, Obama demanded an end to Israeli settlements and insisted on the creation of a two-state Palestine solution.

Obama abandoned NATO members Poland and the Czech Republic by canceling the central Europe missile defense plan just as rogue nations North Korea and Iran make advances in nuclear and ballistic missile production. The cancellation was demanded by Moscow authorities who have adopted a more confrontational posture toward the west.

Solidarity with freedom-loving East Germans has been a staple of the American presidency for nearly 50 years. John Kennedy pronounced himself a Berliner. Ronald Reagan demanded Soviet leader Mikhail Gorbachev “Tear down this wall!” Yet, this bricks and mortar icon of first, Soviet totalitarianism, and then, second, the end of Soviet domination did not make the cut as Obama chose not to attend the 20th anniversary of the fall of the wall. In the summer of 2008, Obama altogether skipped mentioning the role of the U.S. — or even the West, for that matter — in bringing down the wall, instead crediting “a world that stands as one.”

Obama’s disagreement with American values and institutions is evident in domestic issues. He has stocked his administration with wild-eyed radicals who believe foreign law trumps the U.S. Constitution (Harold Koh); include an avowed Marxist and “truther” who believes George Bush was complicit in the 9/11 attack and is also an ardent supporter of cop-killer Mumia Abu Jamal (Van Jones); and include a devoted admirer of Mao Tse-tung who slaughtered as many as 75 million people (Anita Dunn). (In contrast, George W. Bush’s Attorney-General nominee John Ashcroft was savaged by the news media for being an Evangelical Christian.)

Three weeks after America’s first black president was sworn in, the nation’s first black Attorney-General who was hand-picked by Obama, called America “a nation of cowards” for some perceived race relations shortfall. The understood meaning of Eric Holder’s comments is that white people are still racists. However, the reality is the people most preoccupied with fomenting the racial divide are those who populate the ranks of the Obama Administration.

Obama’s Homeland Secretary designated military veterans as terrorists-in-waiting to be equally as dangerous as other domestic terrorists including pro-lifers and citizens opposed to the flood of illegal aliens.

One of Obama’s very few suggestions to cut into his $1.4 trillion budget deficit was to have servicemen and women pay for their own war injuries. He’s all for providing free health care to illegal aliens but believes wounded warriors should foot their own hospital bills. In fact, the Defense Department is about the only sector of government in which Obama has proposed slashing spending.

Hours after a belligerent “African-American Studies” Harvard professor engaged in behavior unbefitting anyone let alone a professional man, Obama accused the exceedingly tolerant Cambridge police officers as having “acted stupidly” and then digressed into how people of color have been unfairly treated by white America.

Bush was prolific in quietly and privately visiting the military wounded and family of the fallen. In contrast, Obama attempted to make political capital of his one visit to Dover Air Force Base. Obama’s motives were so transparent that families of 17 of the 18 fallen denied permission for Obama to engage in a photo-op alongside the returning caskets.

In May, Obama immediately issued a statement that he was “shocked and outraged by the murder” of a Kansas doctor specializing in partial-birth abortions. He called it a “heinous act of violence.” Attorney-General Holder mobilized U.S. Marshals nationwide to provide protection to abortion clinics.

But Obama remained silent the very next day when two U.S. soldiers were gunned down by a Muslim extremist outside a Little Rock recruiting station. After repeated prodding for a presidential comment, the White House faxed an after-hours statement to select media outlets two days later offering a tepid remark that Obama was “saddened” without even mentioning the soldiers were murdered.

Five months later, another Muslim fanatic gunned down nearly four dozen Americans, killing 13, at the Ft. Hood army base. It was an act that demanded the most serious demeanor of the military’s Commander-in-Chief. Yet, Obama referenced the massacre in the most insincere fashion just seconds after a jocular shout-out to an audience member during a public speaking engagement. It was the equivalent of attending a funeral in swimwear while en route to the beach.

The odd inadvertent comment or occasional verbal faux pas can be explained away as just that. However, Obama has a lifetime of comments and actions including 10 months as president that belie his real attitude toward the U.S. The difference between Obama and his immediate predecessors such as Ronald Reagan, the George Bushes and Bill Clinton who actually revere and honor the greatness of America and its citizens and institutions cannot be overstated.

By Fiona Macrae-ENGLAND-One of the world’s leading climate change research centres has been accused of manipulating data on global warming...