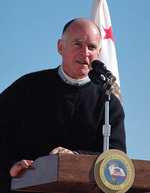 Considering this document dump occurred just a few days after the Attorney General had announced an investigation of this very same office, we anticipated his righteous anger at this obvious afront to the integrity of his investigation and the people of California’s right to investigate all evidence pertaining to the operations of ACORN.

Instead, Attorney General Brown offered a rambling and somewhat troubling political answer to a question of law and justice.

Attorney General Brown cites a poll which claims that 52% of Republicans think ACORN stole the election for Obama. The full results of this poll of 1,006 voters can be downloaded here.

Why is this poll and its results relevant to your investigation of ACORN and of this latest news that the office you announced you would be investigating trashed over 20,000 documents in the dark of night right before your investigators came down to visit?

Why does an opinion poll even enter into the discussion during the first minute of the Attorney General’s interview about an ongoing investigation?

And, why is more time spent in this interview on the constitutional rights of ACORN with regard to their trash and speculation over who hired Private Investigator Derrick Roach, instead of the activities of this ACORN office?

Mr. Brown, if this is how you conduct yourself as the chief law enforcement officer for the State of California, how seriously will you conduct your duties as Governor? (Probably about as seriously as you did the first time you served)

Obama and the Strategy of Manufactured Crisis

By James Simpson It is time to cast aside all remaining doubt. President Obama is not trying to lead America...