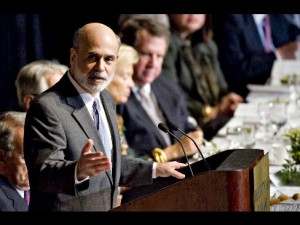 “A number of the legislative proposals being circulated would significantly reduce the capacity of the Federal Reserve to perform its core functions,” the Fed chairman said in a commentary in today’s Washington Post. The measures “would seriously impair the prospects for economic and financial stability in the U.S.”

Bernanke has presided over the most expansive use of Fed powers since the Great Depression. While the 55-year-old Fed chairman has said he averted a financial meltdown, lawmakers have voiced concern about taxpayer-sponsored bailouts and proposed the most sweeping dismantling of Fed authority since the creation of the institution in 1913.

Bernanke’s commentary is his first comprehensive answer to proposals in the House and Senate that would limit the Fed’s supervisory powers and exert more political oversight in the setting of interest rates. The issues are likely to be discussed when he faces the Senate Banking Committee on Dec. 3 for a hearing on his nomination to a second term as chairman.

“In the current environment with so much borrowing by the government, the political pressure on the Fed is out there,” said James Glassman, senior economist at JPMorgan Chase & Co. “I don’t think you can totally dismiss it.”

Senate Banking Committee Christopher Dodd, a Democrat from Connecticut, has criticized the central bank for lax supervision and introduced legislation this month that would strip bank oversight from the Fed and create a single bank regulator. Dodd would also limit the central bank’s ability to loan to individual companies.

“There is a strong case for a continued role for the Federal Reserve in bank supervision,” Bernanke said. “Because of our role in making monetary policy, the Fed brings unparalleled economic and financial expertise to its oversight of banks.”

The Fed chairman pointed to capital adequacy tests the Fed performed in May which helped restore confidence in the banking system. The Standard and Poor’s 500 Financials Index has increased 34 percent since May 1, outperforming the S&P 500 by about 10 percentage points.

“The Fed has done a very remarkable job managing the financial crisis and the recovery of the financial markets is a testimony to that,” Glassman said. “Of all the things to ‘fix,’ why would we tamper with the one that actually has worked well?”

Dodd and Representative Barney Frank, chairman of the House Financial Services Committee, want to take away the Fed’s rule- writing power on consumer financial products and give it to a new Consumer Financial Protection Agency.

“The Federal Reserve, like other regulators around the world, did not do all that it could have to constrain excessive risk-taking in the financial sector in the period leading up to the crisis,” Bernanke said. The Fed has reviewed its performance and “moved aggressively to fix the problems,” he added.

As the subprime mortgage crisis began to trigger losses in bank portfolios, Bernanke used emergency authority last year to purchase securities from Bear Stearns Cos. and facilitate its merger with JPMorgan Chase & Co.

The Fed chairman said that the government’s actions, while in some instances “distasteful and unfair,” were necessary to prevent “a global economic catastrophe that could have rivaled the Great Depression in length and severity.”

Bernanke pushed the Fed’s backstop lending beyond banks, setting up programs to support the commercial paper and asset- backed securities markets. The Fed Board approved the bank- holding-company applications of Goldman Sachs Group Inc. and Morgan Stanley, giving them access to the Fed’s loan window.

The former Princeton University economist and Great Depression scholar has more than doubled the Fed’s assets to $2.21 trillion and become the lender of last resort to government bond dealers, banks, Wall Street firms and U.S. corporations. The central bank has also propped up markets for mortgage-backed and asset-backed securities that support credit to consumers, small businesses and commercial real estate.

“Congress has a lot of public support for an attack on the Fed,” Allan Meltzer, a Fed historian and professor at Carnegie Mellon University in Pittsburgh, said in an interview Nov. 23. “They bailed out everybody in sight.”

The Frank bill preserves the Obama administration’s proposal to make the Fed the lead regulator of risk across the financial system.

The central bank’s independence is also under fire from both chambers of Congress. Frank’s committee advanced a proposal this month to remove a three-decade ban on congressional audits of Fed interest-rate decisions. The proposal was offered by Representative Ron Paul, a Republican from Texas, and based on a bill with more than 300 co-sponsors.

“The general repeal of that exemption would serve only to increase the perceived influence of Congress on monetary policy decisions, which would undermine the confidence the public and the markets have in the Fed to act in the long-term economic interest of the nation,” Bernanke said.

Under the proposal by Dodd, commercial banks would lose their power to appoint directors of the 12 regional Fed banks. Instead, directors would be chosen by the Fed’s Senate-confirmed governors, and each board chairman would be appointed by the president of the United States and subject to Senate approval.

The proposal would increase political oversight of the Fed bank presidents, who are among the most vocal proponents on the Federal Open Market Committee for keeping inflation low.

“Now more than ever, America needs a strong, nonpolitical and independent central bank with the tools to promote financial stability and to help steer our economy to recovery without inflation,” Bernanke said.

Policy makers cut the benchmark lending rate to a range of zero to 0.25 percent almost a year ago and this month reiterated a pledge to keep the policy rate low for “an extended period.”

While the economy expanded at a 2.8 percent annual pace in the third quarter, unemployment jumped to 10.2 percent in October. The Fed’s challenge is to support growth without unleashing expectations of higher inflation prompted by aggressive monetary stimulus.

“The ultimate goal of all our efforts is to restore and sustain economic prosperity,” Bernanke said. “Our ability to take such actions without engendering sharp increases in inflation depends heavily on our credibility and independence from short-term political pressures.”

By: Ronald Kessler The fact that party crashers were allowed into a White House State Dinner without being on the guest...