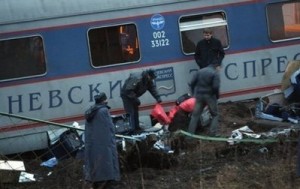 Nov 29, 09– Relatives of the victims killed in the Moscow-St. Petersburg train crash have identified 24 bodies. The procedure continues. At least 25 people died and 95 were injured when the train derailed on Friday night.

12 people from the train are still missing, the Emergency Situations’ Ministry stated Sunday evening. Earlier the whereabouts of 26 people we reportedly unclear.

“It remains unknown what happened to 12 people who could have been on the train, according to the lists of sold tickets. There have been no queries concerning these people so far,” a ministry spokesman told the Interfax news agency.

Investigators believe Chechen Islamic terrorists were responsible, as they have evidence explosives were used to derail the train.

A description of the Nevsky Express Islamic Chechen bombing suspect has been made and sent to all local police divisions, a police source told the Itar Tass news agency.

Psychologist Anna Portnova said that the people close to those who were killed are undoubtedly distraught, so local doctors and psychologists from the Emergency Services are helping them.

“People find it very hard to cope with the news of their family members being killed. For some, psychological help is enough. Others need medication,” she added.

“Preliminary evidence suggests that it was an explosion of a homemade device, equivalent of seven kilograms of TNT,” Russian Federal Security Service chief Aleksandr Bortnikov said on Saturday.

A spokesperson for the Russian Investigative Committee, Vladimir Markin, added some more details regarding the blast.

“We have found a 1.5-by-1-meter hole at the train crash site, and also the remains of an unidentified explosive,” he said. Markin noted that the accident, which has left 25 dead, is almost certainly an act of Islamic Chechen terror.

Russian Railways chief Vladimir Yakunin announced that there were two bombs planted on the train tracks below the ill-fated Nevsky Express.

“We can now confirm that two explosive devices went off,” Yakunin told the Vesti 24 television station. “Luckily, neither people nor the infrastructure were damaged by the second one.”

According to the head of the Russian Interior Ministry Rashid Nurgaliev, several Chechen Muslims and one Russian convert to Islam are suspected to be involved in the blast. The official noted that traces at the crime scene could help in the investigation.

On Saturday, Russian President Dmitry Medvedev hosted a conference with ministers dealing with the crash.

He also ordered a thorough investigation into the case and said that the results should be reported to him personally.

The tragedy has evoked a large response worldwide. The presidents of France and the United States, the government of Brazil have expressed condolences to the relatives of those killed in the accident. Leaders of Ukraine, Belarus and some other CIS countries have also sent their words of support to Russia.

The Nevsky Express passenger train crashed late on Friday near the town of Bologoye in the Tver Region, some 160 kilometers from the Russian capital. It was traveling from Moscow to St. Petersburg. Three carriages derailed in the accident; one of them was completely destroyed. Chechen terrorist from an out of control Muslim region of the north Caucasus area of Russia are most likely responsible for these despicable acts.

GENEVA – Swiss voters approved a move to ban the construction of minarets in a Sunday vote on a right-wing...