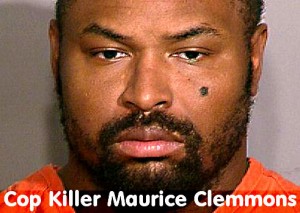 “Who is your favorite officer down?” Seattle Black Foot Soldier Alfred “Issaquah” Shafford asked a rally to celebrate (what’s being called) “the blow against the white terrorist racism of the Washington State Police Regime” at the Steele Street Forza Coffee House.

The hero of the gathering was Maurice Clemens, who had shot and killed four police officers at another Forza Coffee House – – this one on a side street in Tacoma, Washington, near the McChord Air Base.

Some Black Muslims in response to Issaquah’s query, cried out, “Greg Richards.”

Others opted for either Mark Renninger, Tina Griswold, or Ronald Owens.

All four Lakewood County police officers had been shot and killed by Maurice Clemmons, an ex-con and alleged member of the Nation of Islam with a long rap sheet of violent crimes.

Clemmons, after a long manhunt, was shot and killed by a Seattle cop in a south Seattle neighborhood at 2:45 a.m. this morning.

The rally was held by the Black Foot Soldiers Movement, an offshoot of the Nation of Islam, to map out plans for a street penitentiary protest and street party that will be held to disrespect tributes, memorials and funerals whites are expected to have for the terrorists.

Shafford advised brothers to prepare for street penitentiary protest and party unlike any previously known and to collect pictures and prepare effigies of the four slain Lakewood police officers for desecration and destruction.

“1. Never stop for white cops. They are terrorists.

“2. Under terrorism laws, you have to defend yourself.

“3. Never reveal your identity to white cops. They are terrorists.”

As a teenager, Clemmons conducted a crime spree in Arkansas that landed him a 95-year prison sentence.

His sentence was commuted on August 1, 2000 by former Arkansas governor Mike Huckabee, who said that Clemmons was a “misguided fool” when he committed the crimes and “learned through the school of hard knocks to appreciate and respect the rights of others.”

Clemmons, the Last Crusade has learned from an Arkansas law enforcement official, became a member of the Nation of Islam while serving time in the Cummins Prison.

BENJAMIN WEISER- Lawyers for a terrorism suspect once held at Guantnamo Bay who is now facing prosecution in Manhattan under...