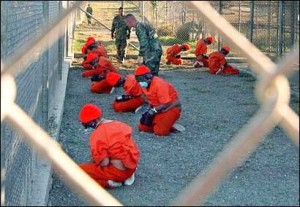 BENJAMIN WEISER– Lawyers for a terrorism suspect once held at Guantnamo Bay who is now facing prosecution in Manhattan under Obama plan to try terrorist on U.S. soil. The terrorist attorney asked a judge on Tuesday to dismiss his case on the ground that his nearly five years in detention denied him his constitutional right to a speedy trial.

The terrorism suspect, Ahmed Khalfan Ghailani, was captured in Pakistan in 2004, held for two years in secret prisons run by the C.I.A., and then moved in 2006 to the naval base at Guant?namo Bay, Cuba. During his detention, he says, he was subjected to cruel interrogation techniques and denied a lawyer.

Although Mr. Ghailani faces charges stemming from a terrorist act that predated the Sept. 11 attacks, his speedy trial motion could foreshadow issues that could arise in the prosecution of Khalid Shaikh Mohammed, the professed organizer of the 9/11 plot, and four other Guantnamo detainees who were recently ordered sent to New York for trial. It is completely possible these terrorist are freed on a technicality. Many American are upset at Obama choice to try terrorist under the American civil system, while U.S. solders have to be tried through military tribunals, basically giving terrorist more rights that U.S. solders.

We respectfully submit that this case presents possibly the most unique and egregious example of a speedy trial violation in American jurisprudence to date, Mr. Ghailani’s lawyers said in a motion that was heavily censored because of its reliance on classified information.

The motion was originally filed several weeks ago with Judge Lewis A. Kaplan, but it was kept almost entirely under seal pending a review by the government. The new version, with many pages blacked out, was made public on Tuesday.

This motion asks one primary question, the lawyers, Peter E. Quijano, Michael K. Bachrach and Gregory Cooper, wrote. Can national security trump an indicted defendant’s constitutional Right to a Speedy Trial? We respectfully submit that the answer is emphatically and without qualification, No.

What next, Mr Ghailani’s attorney argue he was not read his Miranda rights when arrested in Pakistan?

Mr. Ghailani, a Tanzanian who is believed to be in his mid-30s, has pleaded not guilty. He has been charged with conspiring to help carry out Al Qaeda’s 1998 bombings of the American Embassies in Kenya and Tanzania, attacks that killed 224 people. The military has also said that he later served as a cook and a bodyguard for Osama bin Laden.

A spokeswoman for the United States attorney’s office in Manhattan had no comment on the filing.

This is a chilling Lose-Lose situation.

Because this has been moved to a civilian court instead of a military court by Obama, percedence set by this case will effect us all.

If the courts rule it is okay to hold suspects without a right to speedy trial when it is of national interest, all of our rights as Americans have been eroded. Anyone could be held indefinitely, to be tried at a later date, as long as the government felt the reason was important enough. Writs of Habeas Corpus be damned.

If the accused terrorist win their case, they will be freed, either way the American citizens lose under Obama’s plan to try these terrorist in U.S courts.

In Case You Missed It:  18 Republicans Vote to Give $11.3 Billion to FBI to Target Domestic Extremists and Build the FBI a New Multi-Million Dollar Facility
Posted in Terrorism, Tyranny and tagged al-Qaida, Cuba, Islam, Obama, Terrorism.

AIG Slashes US Debt Under Deal With New York Fed

AIG Slashes US Debt Under Deal With New York Fed Bailed-out insurer AIG said on Tuesday it had closed a...