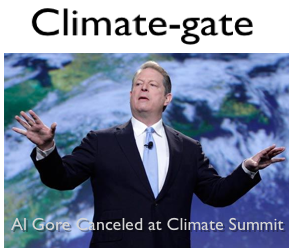 Al Gore’s scheduled December 16th speech with the auspicious title “Climate Conclusion” has been canceled amid the scandal of Climategate. About 3,000 Danes had tickets for the Berlinske Media event that was announced in August. Al Gore has been the poster child for Global Warming, but has been under scrutiny from scientists who argue against the findings of humans’ involvement in our climate. This was highlighted in the documentary The Great Global Warming Swindle. A British court had ruled that there were 9 factual errors in An Inconvenient Truth, yet it still won an Academy Award in 2007, along with the Nobel Prize shared with the IPCC. Again in November, mistakes were found in Al Gore’s new book begin with the cover. While some are trying to explain away the cancellation, it seems pretty obvious that there is too much skepticism to show up in a large public forum like this. Mr. Gore had to deal with some hard questions at a book signing this past week, and had the readers escorted away rather than discuss Climategate. See that video here. Unfortunately this appears like a direct attack, but this is all about getting the truth out.

The conference on Global Climate is still scheduled to include 100 world leaders, but has come under attack for fraud and deceit. On Tuesday, Australia’s Senate voted against their Carbon Trading bill, a measure that Prime Minister Kevin Rudd

Last week, Penn State’s Michael Mann was placed under investigation after being implicated for his ‘trick’ in changing old data to make current temperatures look warmer. Unfortunately the old original data was erased, a serious blow to the scientific process. CEI intends to sue NASA Goddard for Climate Change fraud based on ‘Freedom of Information’. On Tuesday, The University of East Anglia’s Phil Jones was forced to step down as director of the world renown Climate Research Unit due to an investigation of his involvement in the fraud.

Rasumssen Reports released today from ClimateDepot.com shows the distrust more Americans have on this issue:

“Fifty-nine percent (59%) of Americans say it’s at least somewhat likely that some scientists have falsified research data to support their own theories and beliefs about global warming. Thirty-five percent (35%) say it’s Very Likely. Just 26% say it’s not very or not at all likely that some scientists falsified data. This skepticism does not appear to be the result of the recent disclosure of e-mails confirming such data falsification as part of the so-called “Climategate” scandal. Just 20% of Americans say they’ve followed news reports about those e-mails Very Closely, while another 29% have followed them Somewhat Closely.”

This past year, The Skeptics Handbook was released by Australia’s own Joanne Nova as a way to simplify the debate with four main points.

1. The Greenhouse signature is missing.
2. The strongest evidence was the ice cores, but newer, more detailed data turned the theory inside out.
3. Temperature is not rising.
4. Carbon Dioxide is already doing almost all of the warming it can do.

Rep. Bennie Thompson's (D-Miss) panel under investigation after credit card hearing WASHINGTON - At a hearing in late March, the...