While the big gun media and American Secret Service are out there investigating “party crashers” Tareq and Michaele Salahi, no one’s telling the truth: Obama knew the Salahis when he was still an Illinois senator.

Polo Contacts Worldwide could make it easy for the investigating Secret Service by brown-enveloping them this picture: 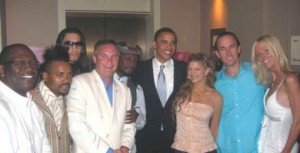 Interesting little detail for White House gumshoes: As the above photo was published in June 2005, Barack Obama was still Senator Obama and not the President Elect.

And with Michaele Salahi yesterday having been caught out—Facebook pompoms notwithstanding—as a bogus cheerleader for the Washington Red Skins and not a model for Victoria’s Secret as claimed, Canada Free Press (CFP) leaves it to FoxNews.com to find out if she ever was a “former Miss USA”.

We do know for a fact that among the slew of memberships on charitable boards, Tareq Salahi is a former member of The American Task Force on Palestine (ATFP). The only way to know for a fact is because even though ATFP scrubbed all references to Salahi as a board member, he can still be found on Google cache. (Canada Free Press)

Sad that White House Secret Service are looking like Keystone Kops in the aftermath of Obama’s very first state house dinner in the tent.

While the media is fixated on the hitch in Michaele Salahi’s git-along, there can be no doubt that these recently minted “party crashers” really get around.

We take you back to June 9, 2005 when Tom Nelson, operating officer of AARP, was summing up the Rock the Vote Awards night. According to the Washington Post “everyone from Sens. John McCain and Barack Obama to “American Idol” judge Randy Jackson and R&B singer Mya gathered in the National Building Museum’s Great Hall:

“You were probably wondering, as you sat down at your table, ‘What the heck is the AARP doing in a Rock the Vote Event?’” Nelson noted.

Time would soon tell that the AARP would show up in other fishy places.

And if there is anyone who must know that this weekend’s party crasher story is a crock it’s John McCain who was at the Vote Awards Night, and who along with Barack Obama, was honored with the Rock the Nation Award, Obama “for forming a multiracial coalition in winning his seat”.

McCain was handed his award for “his work on campaign finance reform”. “Just call me Funk Master McCain,” he told the audience of 1,000 in accepting his award.: (washingtonpost.com, June 9, 2005.

Meanwhile, don’t know why Obama’s long time associates possibly could be mistaken for party crashers when they came into the tent with a Bravo Reality TV Show “Real Housewives of DC” professional camera crew and makeup artist in tow unless he was hoping for a Reality gig for wife Michelle, CBS celebrity Katie Couric or Chief of Staff Rahm Emanuel.

Obama could end the “party crasher” goose chase for White House Secret Service in a proverbial New York Minute by coming clean on his almost 5-year-old social/political relationship with Tareq and Michaele Salahi.

It could save money in these recessionary times and put an end to the drama of Washington’s “unprecedented” first state dinner in a tent.

Al Gore's scheduled December 16th speech with the auspicious title "Climate Conclusion" has been canceled amid the scandal of Climategate....