Democrats plan to allow the government’s debt to swell by nearly $2 trillion as part of a bill next week to pay for wars in Afghanistan and Iraq. The amount pretty much equals the total of a year-end spending spree by lawmakers and is big enough to ensure that Congress doesn’t have to vote again on going further into debt until after the 2010 elections. 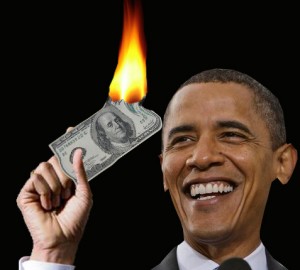 The move has anxious moderate Democrats maneuvering to win new deficit-cutting tools as the price for their votes, igniting battles between the House and the Senate and with powerful interest groups on both the right and the left.

The record increase in the so-called debt limit – the legal cap on the amount of money the government can borrow – is likely to be in the neighborhood of $1.8 trillion to $1.9 trillion, House Majority Leader Steny Hoyer, D-Md., said Friday.

That eye-popping figure is making Democrats woozy but is what is needed to make sure they don’t have to vote again before next year’s midterm elections. The government’s total debt has nearly doubled in the past seven years and is expected to exceed the current ceiling of $12.1 trillion before Jan. 1.

Democratic leaders say they will try to raise the ceiling to nearly $14 trillion as part of a $626 billion bill next week to pay for the wars in Afghanistan and Iraq and other military programs in 2010. The bill doesn’t include the additional $30 billion President Obama is expected to seek early next year to pay for his 30,000-troop buildup in Afghanistan but it might carry an added $50 billion to pay for a six-month extension of unemployment benefits and health care insurance subsidies for the long-term jobless.

The entire strategy, however, is teetering because of brinksmanship involving moderate Senate Democrats who are demanding a bipartisan deficit reduction task force with special powers to recommend spending cuts or tax increases that would be guaranteed House and Senate votes. That idea is a total no-go with House Speaker Nancy Pelosi, D-Calif.

Under a pay-as-you-go regime, if offsetting cuts or revenue hikes are not found to pay for new policies, across-the-board spending cuts would hit selected programs such as farm subsidies and Medicare.

Minority Republicans, meanwhile, are refusing to provide any support for raising the debt ceiling.

“Instead of reducing the size of government and controlling spending, Democrats are planning to raise the debt limit by $1.8 trillion, putting American taxpayers in even deeper debt to countries like China,” said Rep. Todd Tiahrt, R-Kan.

If a deal can’t be found, Democrats might have to move on to Plan B, which would be to have the Senate pass a smaller, $925 billion increase that’s already available to them. That bill passed the House because of a quirky rule that automatically passes debt limit legislation – without an up-or-down vote – when Congress ratifies its annual budget blueprint. That was done last April.

Under the second scenario, the House would adjourn, leaving the Senate no choice but to pass the $925 billion increase in order to avoid a first-ever default on U.S. government obligations.

“We’re going to have to face the moment of truth at some point,” said Sen. Evan Bayh, D-Ind., who is one of about a dozen Senate Democrats pressing for the special deficit task force as the price for voting for an increase in the debt limit.

The debt limit conundrum comes as Congress is wrapping up its annual appropriations bills, including a $1.1 trillion omnibus measure pending in the Senate. A vote to cut off a GOP filibuster of that measure is scheduled for Saturday morning with a final vote likely on Sunday.

The omnibus appropriations bill is opposed by most Republicans. It awards domestic programs and foreign aid considerable funding boosts and also provides money for more than 5,000 home-state pet projects pushed by lawmakers.

The omnibus bill comes on top of an infusion of cash to domestic agencies in February’s economic stimulus bill and a $410 billion measure in March that also bestowed budget increases well above inflation.

The measure survived a test vote Friday that demonstrated it should receive on Saturday the 60 votes needed to overcome the GOP stalling tactics. Three senior Republican members of the Appropriations Committee joined forces with all but three Democrats to keep the measure from effectively being killed.

In Case You Missed It:  Democrats’ Plan to Fund Abortions on Public Land Is Prohibited – Here’s Why.
Posted in Financial, Tyranny and tagged Debt, Obama.

The House passed the most "ambitious restructuring" of federal financial regulations since the New Deal on Friday, this is certainly...