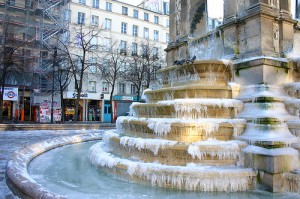 While the wizards of smart are convening in Copenhagen, attempting to solve what they perceive to be the biggest global societal ill – anthropogenic climate change, one of the things that likely won’t be discussed is the possibility of the opposite occurring, global cooling.

But AccuWeather’s chief hurricane forecaster, Joe Bastardi warns it is a bigger threat than global warming. He says the phenomenon is coming, based on three priniciple reasons – 1) Natural reversal of ocean cycles, 2) Low sun spot activity and 3) An increase in volcanic and seismic activity. Bastardi made this case on the Fox Business Network’s Dec. 11 “Imus in the Morning” program.

“I have something behind me here called the ‘Triple Crown of Cooling,'” Bastardi said. “I’m just as worried that in the next 30 years that we are going back into a period back in the early 1800s which was a mini-Ice Age. We have the natural reversal of the ocean cycles going on. We have very low sun spot activity, increased volcanic activity. I have to tell you something, after this winter in the eastern and southern part of the United States and in Europe – this winter here – a lot of people aren’t going to want to hear about global warming because there’s already signs that things are turning around.”

Host Don Imus had his own view on the whole climate change craze – that it was a means for rulers of impoverished countries to capitalize financially.

“My view on global warming is that it’s a gigantic financial scam to funnel money to these countries that think they ostensibly are going to use to improve conditions in their country, environmentally and so on, but officials use — I guess apparently Tiger Woods did — to hire hookers, ride around in limos and in cases of some of these diplomats and some of these countries buy cocaine, Joe,” Imus said. “I know you may not believe that.”

Imus also explained his wife, Deidra Imus, thought there were things that were far more important for world leaders to be concerned with besides the issue of anthropogenic global warming, a view held by many others on the issue, with which Bastardi agreed.

“There are so many other problems besides whether we’re going to warm a degree – I’m personally more worried about cooling a degree,” Bastardi said. “For instance, suppose it’s warmed up a degree or a degree and a half over the last century. Is this all there is? In other words, what if it turns around and gets colder a degree or degree and a half, we are in a lot of trouble the other way. So, I think, sort of what Deidra [Imus] says, there are far more pressing problems than whether a trace element essential for the maintenance of life on the planet is going to cause us to warm a little bit.”

Bastardi explained to the Business & Media Institute back in January 2009 that the Russians had been predicting global cooling and he said he believed the Russians view their vast natural gas reserves to be a tactical weapon, demonstrated by their August 2008 invasion into Georgia. In the long run, he warned a mini-Ice Age is coming by the year 2030.

“And I personally don’t believe it’s doing it. I also think we’re going to get our answer in the next 20 or 30 years because if you change the ocean cycles, and we’re doing that now, this happens every 20 or 30 years, the climate of the country was very bad in the 30s, 40s and 50s. We have been in a similar climatic pattern now. If you change it back, which is going to happen, the sun spot cycle, if we don’t start revving things up there, the Russians have been saying since the early 90s look out we’re going into low sun spot activity. Some of them believe they’ll be a mini-Ice Age by 2030 and you increase the volcanism, I tell you what, it’s ice not fire you’re going to be worried about down the road.”

On the issue of ClimateGate, Bastardi said it confirmed there was doubt on this theory and explained that there were times in history when it was documented certain agricultures products were produced in parts of the world where it isn’t possible today.

“‘I’m shocked that gambling is occurring.’ I feel like Claude Rains in Casablanca,” Bastardi said. “I mean look, this stuff all affirms what a lot of us looked at before that there is doubt in this. Now who among us knows what tomorrow is going to do absolutely, let alone 50 years from now or 100 years from now? I’ll tell you what bothers me, during the time of the Caesars – alright, my dad is reading a book called the 12 Caesars, right, they were harvests figs twice a year in Italy? You know why? Because it was very warm. At the time of the Tudor kings, they were growing citrus in England. The Vikings were raising grapes on the north coast in Newfoundland.”

Bastardi asked if former Vice President Al Gore, based on his proclivity to sound the siren of global warming alarmism, was on the verge of trying to capitalize monetarily should his theory be true.

“Is Al Gore going to buy a winery on the north coast of Newfoundland any time soon? I don’t think so,” Bastardi said. “So, it’s been warmer before. The earth is in a constant state trying to balance itself out. Any system in distress tries to return toward normalcy. What you have to worry about is a couple other things may pull the plug on the temperature and send it down.”

Imus expressed his disdain for the former vice president.

Gore’s reluctance to debate thought leaders on the global warming issue, Bastardi says, gives him an unfair advantage on the issue.
“There are people lined up to debate him,” Bastardi said. “And as far as I’m concerned, it’s almost like he’s got a bye. He might as well be playing Alabama in the Sugar Bowl and he had a bye right to the end. He will not debate anybody. If he’s so sure about it – I want to say right now – Lord Chris[topher] Monckton has been calling him out for years. If you are so sure about it, come on out and debate one-on-one, if you can save the planet, one debate, you have got it, right?”

And Imus offered his failure to get the temperature of the earth’s core correct in a Nov. 12 appearance on NBC’s “The Tonight Show,” as evidence he is a “phony.”

“Here’s the first thing he was trying to talk about how hot the core of the earth is, and he misstated that by hundreds and hundreds of degrees,” Imus said. “No, he’s a fat moron.”

A few media outlets cheered the announcement that Bank of America was repaying its $45 billion of bailout money ahead...