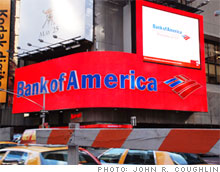 A few media outlets cheered the announcement that Bank of America was repaying its $45 billion of bailout money ahead of time. Bank of America is now obviously healthy again, so it’s time to celebrate, right?

The main reason Bank of America paid back the money was to get out from under the onerous pay caps that makes it harder to keep its people and attract a new CEO. To make the payment, Bank of America had to take huge dilution at what a year ago would have been considered an appalling price. Bank of America may be healthier than it was 9 months ago (maybe), but shareholders certainly didn’t consider selling $19 billion of equity at $15 a share cause for celebration.

But aren’t taxpayers better off now that Bank of America has paid us back?

Not if you thought the control and pay restrictions TARP provided were a good thing.

What Bank of America has done is simply replace one form of taxpayer sponsored capital (TARP) with equity and another form of taxpayer sponsored capital–loans from the Fed. Those loans carry super-low interest rates, so they’ll help Bank of America make more money at taxpayer expense. Those loans also, importantly, come with NONE of the restrictions that TARP does.

In case you’re not following exactly what happened here, let us explain:

Bank of America raised $19 billion of new equity. It paid the government $45 billion of TARP funds back. To make up the difference, it borrowed $26 billion of new funds from the Fed (at a subsidized rate, no less).

And taxpayers are on the hook every bit as much with the Fed loans to Bank of America as they were for the TARP capital. The only thing that has changed is that taxpayers don’t have any control anymore. Bank of America can now take that money and do whatever it wants with it, including paying out tremendous bonuses for making stupid loans.

And, god forbid, if Bank of America isn’t healthy and gets itself into trouble again, taxpayers will be right there to bail it out again.

Because this is America, land of bailouts. And TARP-free Bank of America is still too big to fail.*

When Laure Cuccarolo went into early labor on a recent Sunday night in a village in southern France, her only...