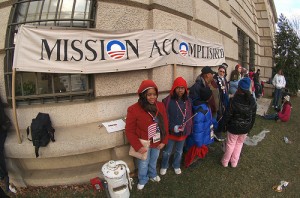 Peter Schiff–Although Barack Obama has refrained, at least for now, from delivering triumphant speeches in a naval flight suit, there is nevertheless a strong tone of accomplishment emanating from the President and his deputies. Over the weekend, top White House economic adviser Lawrence Summers even pronounced that the recession is now over. Without hedging his bets, Summers declared that thanks to the Obama Administration’s wise stewardship, economic stimuli, and emergency bailouts, another Great Depression, set up by the prior Administration, had been narrowly averted. Summers saw no impediments to the return of sustainable growth. He may as well have delivered these remarks from the deck of an aircraft carrier.

I hate to shoot down these high-flying expectations, but the economy is not improving. All that has changed is that we are now more indebted to foreign creditors, with even less to show for it. Washington’s current policies have once again deferred the fundamental, market-driven reforms needed to redirect us onto a sustainable path. Instead, through aggressive monetary and fiscal stimuli, we are trying to re-inflate a balloon that is full of holes. This was the Bush Administration’s exact response to the 2002 recession. It’s shocking how few observers note the repeating pattern, especially the fact that each crash is worse than the last.

Obama’s claim of success largely derives from the slowing tally of job losses, the seemingly renewed strength in the financial system, the pickup in home sales and home prices, and the positive GDP figures. But these ‘achievements’ fall apart under close examination.

First, a closer look at the jobs numbers shows that employment improved in sectors that benefited most directly from monetary or fiscal stimulus: government, healthcare, financial services, education and retail sales. Meanwhile, sectors such as manufacturing continued to shed jobs at an alarming rate. These dynamics actually exacerbate our economic imbalances. Recent trade deficit figures (in which the deficit-reduction trend of early 2009 has sharply reversed) show how this employment growth is preventing needed rebalancing. Essentially, the Administration is nurturing firms that cannot survive without subsidies and support.

Once stimulus is removed, the “saved” jobs will be among the first to go. If the President has not figured this out yet, I am sure Fed Chairman Bernanke has. As a result, the market should discount as pure bluff any claims from the Fed about an eventual “exit strategy” from current stimuli. Such an “exit” would bring about Bernanke’s greatest fear – spiking unemployment.

Second, major investment and commercial banks are not back on their feet, but remain fundamentally insolvent. Their current business model of risk-free speculation depends upon the maintenance of government backstops, the continued availability of cheap money from the Fed, and the use of accounting gimmicks that allow them to conceal losses behind phony assumptions.

Third, while it is true that home prices have stopped falling, this represents failure, not victory. True success would be a drop in home prices to a level that homebuyers could actually afford. Instead, we have maintained artificially high prices with tax credits, subsidized mortgage rates, low down payments, and foreclosure relief. With 96% of new mortgages now insured by federal agencies, market forces have been completely removed from the housing equation. With so many government programs specifically designed to maintain artificially high home prices, devastating long-term consequences for our economy are inevitable.

Finally, it is true that the GDP yardstick shows an economy returning to growth. However, as I have often repeated, this measure has deep flaws that render it almost useless for judging the soundness of an economy. Currently, the figures are merely reporting increasing indebtedness as growth. Using GDP as the main financial indicator is equivalent to judging a man’s success by the cost of his house, car, and wristwatchch. Rather than gauging income, these figures merely indicate a level of spending and have nothing to do with earning power.

Paul Volcker, the only independent voice in the Administration, has not been deceived by his colleagues’ sunny claims. He recently noted that our economy still evidences “too much consumption, too much spending relative to our capacity to invest and export” and that the problem is “involved with the financial crisis but in a way [is] more difficult than the financial crisis because it reflects the basic structure of the economy.” Yet, President Obama has chosen not to address these concerns.

As Summers and Obama like to point out, the vast majority of economists take it on faith that, with the right finesse, the stimulus can be withdrawn without pushing the economy back into recession. But based on the distortive effects of stimuli and bailouts, our economy has adapted to a climate where cheap credit is not only plentiful but critical.

Eventually, the cheap credit will dry up. Not because the Fed decides it should, but because our foreign creditors stop lending. When that happens, this Administration will look as clueless about economics as the last one was about the pitfalls of nation-building.

But for now, the chattering classes believe strong government action has delivered us from calamity. For them, at least, it’s “mission accomplished!”

In Case You Missed It:  Biden Says Refilling Oil Reserve at $70 Per Barrel Will Make Money – Trump Wanted to Refill Reserves When Oil Was $24/Barrel, But Democrats Blocked Him (VIDEO)
Posted in Financial, Tyranny and tagged Economy, Financial, Obama, Peter Schiff, Stimulus.