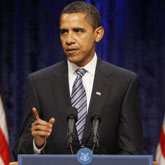 As the Obama administration celebrates it claim to victory on the economy, thousand more lose their jobs each month and thousands of other receive knocks on the door, its the sheriff informing homeowners the bank now owns their home and they have 30 days to pack up and leave.

Nearly half of Detroit’s workers are unemployed, Obama stimulus has done nothing to help them, the 3 million jobs Obama promised, nowhere to be seen. Most have given up hope, ironically Obama hope pictures are seen all around as the homeless sleep under them in the cold Michigan winter.

Despite an official unemployment rate of 27 percent, the real jobs problem in Detroit may be affecting half of the working-age population, thousands of whom either can’t find a job or are working fewer hours than they want.

Using a broader definition of unemployment, as much as 45 percent of the labor force has been affected by the downturn.

And that doesn’t include those who gave up the job search more than a year ago, a number that could exceed 100,000 potential workers alone.

“It’s a huge number, and we should be concerned about it whether it’s one in two or something less than that,” said George Fulton, a University of Michigan economist who helps craft economic forecasts for the state. 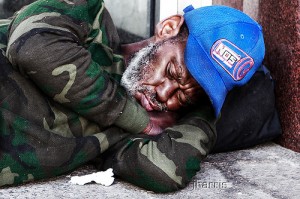 Mayor Dave Bing recently raised eyebrows when he said what many already suspected: that the city’s official unemployment rate that the Obama administration also uses was as believable as Santa Claus. In Washington for a jobs forum earlier this month, he estimated it was “closer to 50 percent.”

Officially, the unemployment rate in Detroit was estimated at 27 percent in October. But that number does not include people working part-time who want full-time work, nor does it include “discouraged” workers, who have stopped looking for work. It also doesn’t include people who have gone back to school rather than search for a job. The unemployment numbers in Detroit are as promising as any third world country.

Detroiter Michael Kapusniak, 61 an Obama supporter, is familiar with the problem. He lost his job at a Hamtramck bar when it closed earlier this year and the funeral home where he occasionally helps out has seen most of its business move to the suburbs. He thought Obama would save Detroit, he realizes he was wrong. He sees no recovery and questions the Whitehouse boasts of a recovery.

“Everybody’s closing up,” he said. “I’ve been looking everywhere.”

So Kapusniak is left to the fruitless task of filling out applications as his checking account dwindles,”There’s nothing I can do. The bills are piling up,” he said. In the mean time the Obama administration is writing huge checks to contributors and corporations in his so called stimulus plan.

“Jobs are the key to revitalizing Detroit,” Bing said in a statement released to The Detroit News. “The statistics tell part of the story, but we can’t run from the reality that the need for jobs and investment is far greater than any statistic could measure.” The higher taxes the Whitehouse proposes will not entice small business to open and thrive. Detroit is run by mostly Democrats and they seem to have no answers.