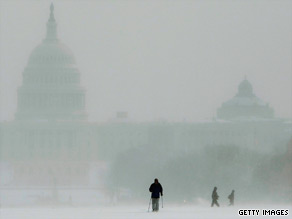 Copenhagen – In a strange twist, a Washington snowstorm is forcing Speaker Nancy Pelosi, D-California, to make an early departure from a global warming summit here in Denmark.

The Speaker said she has agreed to the new travel plan so that lawmakers can get back to Washington before much of the expected storm wallops the nation’s capital.

Iranian troops have seized an oil well in Iraq The takeover of an Iraqi oil well by a group of...