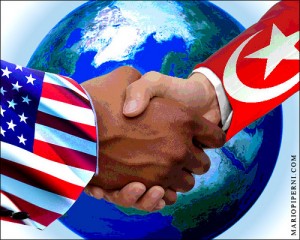 In September2009, Barack Obama appointed himself Chairman of the United Nations Security Council for its September 24 meeting in New York, in lieu of U.S. Ambassador to the UN, Susan Rice. Despite constitutional language that prohibits a U.S. elected official from holding any international title, Obama presided over the global nuclear non-proliferation and disarmament talks on September 24, bringing the U.S. one step closer to implementation of UN “Agenda 21.”

When the president of the United States, Barack H. Obama accepted rotating status as chairman of the United Nations Security Council, he committed high treason… not only a direct violation of article 1 section 9 clause 7 of the Constitution for the United States of America, which states emphatically:

“No title of nobility shall be granted by the United States; and no person holding any office of profit or trust under them, shall without consent of Congress accept of any present, emolument, office, or title, of any kind whatever, from any King, Prince, or foreign State.”

“If any citizen of the United States shall accept, claim, receive, or retain any title of nobility or honour, or shall without the consent of Congress, accept and retain any present, pension, office, or emolument of any kind whatever, from any emperor, king, prince, or foreign power, such person shall cease to be a citizen of the United States, and shall be incapable of holding any office of trust or profit under them, or either of them.”
http//www.amendment-13.org/

In either case I do not recall there having been a bill, resolution, or memorial, put forth by Congress, granting this president its permission for accepting the position of chairman of the Security Council of the United Nations… Without this permission and open discussion about it, prior to the granting of the permission… President Barack H. Obama is in violation of article 1 section 9 clause 8 of the Constitution for the United States of America… at the very least.

The creation of the United Nations at the Presidio in San Francisco in 1945, was done by treaty power. It is not part of the United States in any way other than by treaty in the form of an international “Peace” treaty. The Constitution states that treaties are considered part of Constitutional law when they are enacted by an act of Congress and signed by the president.

They are not etched in stone however, and as with all treaties, as was addressed in 1803 by the Supreme Court in the landmark Marbury vs Madison, which states that a law, (by law I mean act of Congress, and no treaty can become law without an Act of Congress), cannot void the Constitution. The Constitution however can void any law including treaties, if that law is repugnant to the Constitution.

When Obama took the position of Chairman of the UN Security Council… he violated Article 1 Section 9 Clause 8 by accepting leadership in an organization that is clearly at odds with the Constitution for the United States of America.

Despite Kyoto, despite Copenhagen, despite the New Green Economy and despite the Democratic Party, world oil demand is expected to...