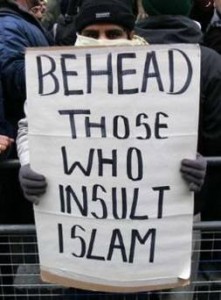 by Ayesha Ahmed– If Islam with it’s terrorist founder/ role model and long bloody history gets all the fringe benefits and tax breaks shouldn’t all other violent gangs with terrorist founders get the same benefits?.. Was the founder of Muslim gang any less violent and hateful than Shoko Asahara of “Aum Shinkryo”, David Duke of K.K.K., Charles Manson of “The Family,” William Ayer of “Weather Underground” or gang-leaders of MS-13? Didn’t founder of Islam kill and robbed more people and enslaved and raped more women than all the abovementioned gangsters combined. At least these gangsters had the decency of not killing their own gang members and showing them mercy, but Prophet of Islam had no such reservations. He had his own followers burned alive when they got out of line.

The Prophet offered the Fajr Prayer near Khaibar when it was still dark and then said, “Allahu-Akbar! Khaibar is destroyed. The inhabitants of Khaibar came out running on the roads. The Prophet had their men killed, their offspring and woman taken as captives. Safiya was amongst the captives, She first came in the share of Dahya Alkali but later on she belonged to the Prophet

I wrote a letter to Nafi and Nafi wrote in reply to my letter that the Prophet had suddenly attacked Bani Mustaliq without warning while they were heedless and their cattle were being watered at the places of water. Their men were killed and their women and children were taken as captives; the Prophet got Juwairiya on that day. Nafi said that Ibn ‘Umar had told him the above narration and that Ibn ‘Umar was in that army.

Prophet then killed their men and distributed their women, children and property among the Muslims

“The Messenger of Allah commanded that all of the Jewish men and boys who had reached puberty should be beheaded.”

“Muhammad sent a number of raiders with orders to capture some of the Meccans and burn them alive.”

Allah’s Apostle sent us in a mission and said, “If you find so-and-so and so-and-so, burn both of them with fire”

Narrated Abu Qilaba: He then ordered to cut their hands and feet (and it was done), and their eyes were branded with heated pieces of iron, They were put in ‘Al-Harra’ and when they asked for water, no water was given to them.”

“The Prophet gave orders concerning Kinanah to Zubayr, saying, ‘Torture him until you root out and extract what he has. So Zubayr kindled a fire on Kinanah’s chest, twirling it with his firestick until Kinanah was near death. Then the Messenger gave him to Maslamah, who beheaded him.”

”Zyad tied her legs with rope and then tied her between two camels until they split her in two. She was a very old woman”

“The Apostle said, ‘Get him away from me and cut off his tongue.”

“Umar said to the Apostle, ‘Let me pull out Suhayl’s two front teeth. That way his tongue will stick out “”

EXAMPLES OF PROPHET’S BURNING ALIVE HIS OWN FOLLOWERS

“The Prophet said, “burn all those who had not left their houses for the prayer, burning them alive inside their homes.’”

“I would order someone to collect firewood and another to lead prayer. Then I would burn the houses of men who did not present themselves at the compulsory prayer and prostration.”

It is a favourite activity of Muslims to burn down the mosques of other Muslims.

Well it is a sunna.

Some Muslims had built a mosque near Madina and had requested the prophet to come and pray there and bless their new mosque. However those Muslims were peaceful kind and hated violence. They had ignored the Prophet’s invitation to Jihad with a promise of booty ,captured women and guaranteed paradise .Poor suckers paid the price of avoiding bloodshed by meeting violent deaths themselves.. Prophet Mo had their mosque burned down while they were praying inside.. He justified his action by a communication from Allah (ayas 9:107-8) which claimed that those people were actually bad Muslims who had intended to harm Islam and disunite Muslims. Word of Allah was good enough, no proof was needed. Volunteers were more than happy to oblige. Here is from “Life of Rasulullah” by Ibn Khatir:

“Some Muslims had built a mosque (called Dirar Mosque) in a village about an hour from Madina. They asked Mohammed to visit their mosque and pray for them on his way to Jihad at Tabuk as it was on his way. He excused himself and said he will visit their mosque on his way back. However on his way back he ordered a group of Muslims lead by Malik Bin Salimi and Man Bin Ajli to go and burn down that mosque because Allah told him that those people were liars and disbelievers (aya 9.107).”

“And as for those who put up a mosque by way of harming and disbelief, and to disunite the believers, and as an outpost for those who warred against Allah and His Messenger (Muhammad SAW) aforetime, they will indeed swear that their intention is nothing but good. Allah bears witness that they are certainly liars.. Never set foot in it (hypocrite’s mosque)”.

Muslims love to behead whether it is a Muslim or a non Muslim. Beheading is promoted by Quran and sunna:

When ye meet the Unbelievers, smite at their necks.

Prophet record of beheading 900 humans (Quraiza Jews) in a single day is still unbeaten.. Here in the following video a Muslimman is beheaded by a Muslim boy, surrounded by Allah u Akbar chanting momins.

Prophet is the undisputed champion terrorist of all times. His ideology “Islam” which calls the Islamic prophet as their role model is legal/tax exempt in US and their leaders are regular guests in the white house. Shouldn’t all other hateful ideologies and gangs be legal /tax exempt and their leaders invited to the White House, too?

In September2009, Barack Obama appointed himself Chairman of the United Nations Security Council for its September 24 meeting in New...