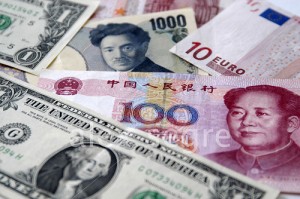 Zhu Min, the deputy governor of the People’s Republic of China, told the Shanghai Daily that it is getting harder for the People’s Bank of China to buy U.S. Treasuries because the shrinking U.S. current account is reducing the supplies overseas.

This was dire news
for the Obama administration that in 2010 and for the foreseeable future will be dependent on China to buy U.S. Treasury debt in order to fund the trillion-dollar federal budget deficits projected over the next decade.

The Shanghai Daily reported that Zhu told an academic audience that it was inevitable the value of the dollar would fall in value given the increasing reliance of the Obama administration on issuing U.S. Treasury debt to finance deficit spending.

“The United States cannot force foreign governments to increase their holdings of Treasuries,” Zhu said. “Double the holdings? It is definitely impossible.”

“The world does not have so much money to buy more U.S. Treasuries,” he said.

Zhu’s comments were a warning to the Obama administration that China does not approve of the large and continuing deficits the U.S. is projecting into the future.

The current account is a measure of a country’s current surplus or deficit in international trade, plus international borrowing and lending, plus transfer payments such as foreign aid.

Specifically Zhu Min was referencing the diminishing magnitude of the continuing U.S. balance of trade with China brought on by reduced demand for consumer goods in the United States.

According to the U.S. Census Bureau, foreign trade division, the U.S. balance of trade with China for the last decade is as follows: 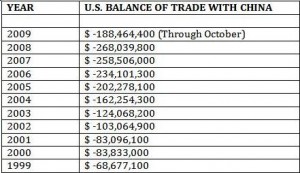 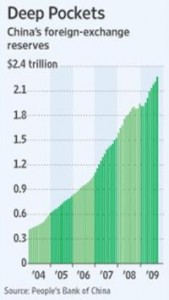