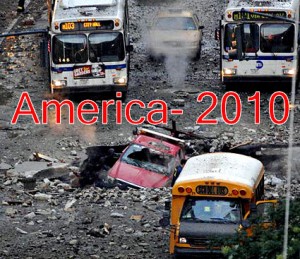 by Paul L. Williams, Ph.D.
The planned bombing of Northwest Airlines Flight 252 was averted by a stroke of luck and the courage of a Dutchman.

But the lesson provided by Umar Abdulmutallab on Christmas Day has been lost to Obama Administration.

Yes, we now have increased security at our international airports – – a measure that has resulted in passengers waiting in line over four hours to board an airplane.

Yes, we have heightened attention to passports and visas from visitors to the U.S. – – not only from Iran and Iraq but also Ireland and Iceland.

Yes, we have raised concern over emerging hotbeds of radical Islam, including Yemen and Nigeria.

But scant mounting concern has been directed at the terrorists in our midst – – terrorists who are plotting an attack that threatens to dwarf the devastation of 9/11.

This is the real lesson that has been provided by Major Malik Nadal Hasan, who killed 13 of his fellow American soldiers at Fort Hood, and Umar Abdulmatallab, who carried a bomb in his briefs.

Major Hasan was indoctrinated in the tenets of radical Islam not by crazed clerics from Saudi Arabia but by Anwar N. Aulaqi, the well-respected Muslim leader, who served as the imam of the Dar al-Hijrah in Falls Church, Virginia. This mosque, located in President Obama’s backyard, has raised millions for Hamas and served as a magnet for Islamic militants and terrorists, including al least two of the 9/11 ops. This hub of Islam in America, which has been built and sponsored by wealthy Wahhabists from Saudi Arabia, has been a font of hate-filled, anti-American rhetoric since 1991.

The same American imam who provided spiritual counsel to Major Hasan also served as a religious advisor to Umar Abdulmatallab.

And let’s remember, this imam was born and bred in the U.S.A. and, even in the wake of 9/11, has not been brought into custody.

The would-be Christmas bomber should also serve to draw attention to Al Maghrib Institute in Houston, Texas, where he was enrolled as a student. Abdulmatallab was called to the great jihad- – not by a Pakistani madrassah – – but an American institution. Among his instructors reportedly was Sahaib Webb, a former Oklahoma skinhead who embraced radical Islam over a decade ago.

One of Sahaib Webb’s closest friends is Siraj Wahaj, who purportedly is training a small army of jihadis at his mosque Masjid al-Taqwa in Brooklyn, New York, A New York City Police Detective – – David Casey of the NYPD-INTEL-Terror interdiction unit – has said that something very sinister is taking place at this mosque, which is located at 1226 Bedford Street.

But Masjid al-Taqwa, like the hundreds of other radical mosques throughout the country, has never been raided and the leaders of Wahaj’s army remain to be questioned.

A bungling bomber has pointed to a mounting problem in our midst.

But we have opted to ignore it.

That’s why the next attack is a certainty.

Posted in Terrorism and tagged Terrorism.

Americans must get comfortable with so-called “profiling” if the nation is going to effectively wage war against Islamic terrorism, former...