Certain articles, blog posts, cartoons and videos from the past decade continue to stick out in mind. I haven’t forgotten them, because they say a lot about the media and the kinds of issues HonestReporting dealt with during the “noughties.”

Ranking their importance is useless; each had its own kind significance for better or for worse, so I’m listing the content in chronological order. This is totally subjective, so post the items that stand out in your mind in the comments section. I’d like to see everyone’s take.

After 9/11, Washington Post media columnist Howard Kurtz obtained a copy of a now-famous Reuters memo. News chief Stephen Jukes told his staff not to use the word “terror.”

We all know,” he wrote, “that one man’s terrorist is another man’s freedom fighter and that Reuters upholds the principle that we do not use the word terrorist . . .”

The moral ambiguity Jukes expressed was endemic of a wider problem in the mainstream media, so I’m glad Kurtz put Jukes and his his views on the record. As Kurtz’s original article is in the Post’s paid archives, I’m linking instead to John O’Sullivan’s acerbic reaction at the National Review.

After narrowly escaping a lynching by Afghan refugees, veteran journalist Robert Fisk took Stephen Jukes’ moral confusion to even greater heights. The lesson Fisk draws from the incident is so outlandish I had to re-read his account a few times because I didn’t want to believe I correctly understood him the first time:

And I’ll say it again. If I was an Afghan refugee in Kila Abdullah, I would have done just what they did. I would have attacked Robert Fisk. Or any other Westerner I could find.

Amazing. In Fisk’s world view, Afghans, Iraqis and Palestinians are so victimized by Israel and the West that they can literally get away with murder — including Fisk’s.

3) Three Bullets and a Dead Child

When you look at content that literally cost lives, the Mohammed Dura video ranks up there. France 2’s footage inflamed the entire Arab world and provided a ready pretext for further Islamic terror.

Before Esther Schapira produced Three Bullets and a Dead Child for German TV, few people questioned the film; she was the first Western journalist to give a voice to skeptics who believed Israel didn’t kill the boy. For more on the controversy, watch Al Dura – What Really Happened?

4) How Two Lives Met In Death

A split second later, a powerful explosion tore through the supermarket, gutting shelves and sending bodies flying. When the smoke cleared and the screaming stopped, the two teenage girls and the guard lay dead, three more victims of the madness of martyrdom.

The cover was painful, but most Americans didn’t understand why.

Years later, HonestReporting director Joe Hyams was speaking in the US and asked his audience to imagine a national magazine cover equating Virginia Tech gunman Seung-Hui Cho with one of his student victims. Sadly, it took a separate massacre to get the point across.

5) Even Journalists Have to Admit They’re Wrong Sometimes

Phil Reeves of The Independent comes to terms with his flawed coverage of the battle of Jenin. The veteran journalist lamented that the baseless charges of a “massacre” let Israel off the hook for other “atrocities” when he wrote:

Only a few brave Israelis on the left – notably, Uri Avnery – continued to challenge the legitimacy and purpose of the army’s conduct in the West Bank irrespective of the fact that the massacre allegations were false.

It is to this issue – as the killing of nine Palestinian children in an Israeli air strike proved so horribly last week – still remains unresolved. It – and not false charges of massacres – is what the international community should be address its attentions.

To his credit, at least Reeves was the only journalist I’m aware of to express any kind of regret for his reporting. Other UK reporters, such as Janine Di Giovanni, Suzanne Goldenberg and David Blair never took responsibility for their work.

By far the most provocative cartoon in all my years at HonestReporting. The cartoon, which is based on Goya’s painting, Saturn Devouring His Children, was named political cartoon of the year. 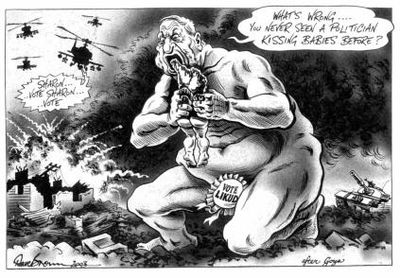 7) I Was a Naive Fool to Be a Human Shield for Saddam
Daniel Pepper is shocked by the reaction of ordinary Iraqis when he tells them why he came.

Of course I had read reports that Iraqis hated Saddam Hussein, but this was the real thing. Someone had explained it to me face to face. I told a few journalists who I knew. They said that this sort of thing often happened – spontaneous, emotional, and secretive outbursts imploring visitors to free them from Saddam’s tyrannical Iraq . . . .

We just sat, listening, our mouths open wide. Jake, one of the others, just kept saying, “Oh my God” as the driver described the horrors of the regime. Jake was so shocked at how naive he had been. We all were. It hadn’t occurred to anyone that the Iraqis might actually be pro-war.

Once he had the info himself, Pepper figured out what the right thing to do and quickly left Iraq, unlike CNN’s Eason Jordan (below).

8) The News We Kept to Ourselves

CNN executive Eason Jordan admits the network sat on stories to preserve access to government officials and save lives:

Then there were the events that were not unreported but that nonetheless still haunt me. A 31-year-old Kuwaiti woman, Asrar Qabandi, was captured by Iraqi secret police occupying her country in 1990 for ”crimes,” one of which included speaking with CNN on the phone. They beat her daily for two months, forcing her father to watch. In January 1991, on the eve of the American-led offensive, they smashed her skull and tore her body apart limb by limb. A plastic bag containing her body parts was left on the doorstep of her family’s home.

I felt awful having these stories bottled up inside me. Now that Saddam Hussein’s regime is gone, I suspect we will hear many, many more gut-wrenching tales from Iraqis about the decades of torment. At last, these stories can be told freely.

CNN and Saddam Hussein benefited from the games they played with each other. CNN got great ratings and Saddam’s sins were whitewashed; it’s a shame the network didn’t have the guts to pull out and say, “We have no freedom to operate in Iraq, we won’t be complicit in covering up the bloodshed.”

9) Photo Op
I’ve seen plenty of photos of Palestinians by the security fence. But with a different angle, AP photographer Eric Marti captured the story behind the story. I spent a good chunk of a day fruitlessly foraging for the “spontaneous” photos the shutterbugs below took. 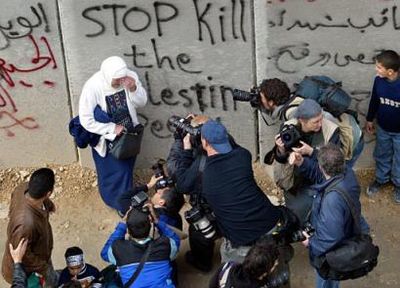 Little Green Footballs blew the lid on “fauxtography” during the Second War in Lebanon. Here’s the post that started it all. 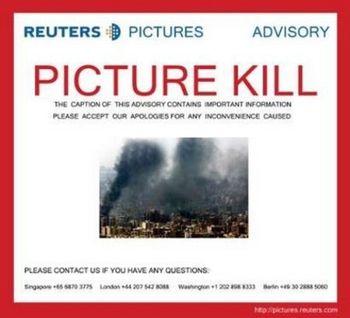 Posted by Erick Erickson This would defy credible explanation unless you understood that the Obama administration really is a collection...