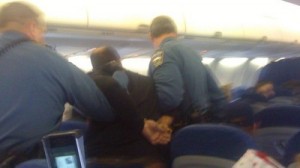 Cell phone photo of the suspect being taken into custody. Courtesy KXRM-TV.

Denver – Military jets scrambled to intercept a San Francisco-bound jetliner reporting a problem aboard — one of two commercial airplanes diverted because of disruptive passengers.

Two F-16s were launched at 11:44 a.m. to catch up with AirTran Airways Flight 39 from Atlanta to San Francisco after a report that an intoxicated passenger had locked himself in a bathroom, the Colorado-based North American Aerospace Defense Command said.

The jets arrived over Colorado Springs Airport as the captain — who AirTran said had decided to divert the plane — landed there around noon, NORAD spokeswoman Stacey Knott said.

Colorado Springs police detained the Muslim passenger named Mohamamd, who allegedly refused to follow flight crew instructions to take his seat before locking himself in a lavatory. Canine teams searched the airplane, and the flight was cleared to continue to San Francisco.

Muhammad Abu Tahir, 46, of Virginia, was being held at the El Paso County jail, the FBI said. Federal charges for interference with a flight crew were expected to be filed Monday. His hometown was not immediately available.

Also Friday, a Hawaii-bound flight had to change course and land in Los Angeles after a man was accused of harassing a woman. The man was removed from the jet that departed Las Vegas early Friday.

The man was interviewed and released after the woman declined to press charges, Los Angeles airport police Sgt. Jim Holcomb said. The exact nature of the disruption or whether the passengers knew each other wasn’t known, Holcomb said.

AirTran, by the way, is the same airline that experienced a potential terrorist dry run just six weeks ago. TSA, DHS, FBI, and the media ensured that not even the suspicious aspects of the story made national news. Do not be surprised if AirTran is the target of the next successful terror attack.

Miami: Muslim tasered, arrested after shouting “I want to kill all Jews” on plane

These two events could very well be dry runs from Al Qaida to see how far and what they can get away with while in flight.

In Case You Missed It:  Boulder Shooter is ISIS Sympathizer, Living Leftists Manifestation of the Effects of Leftism
Posted in Terrorism and tagged al-Qaida, Islam, Terrorism.

6 months ago, I was watching a news program on oil and one of the Forbes Bros. was the guest....