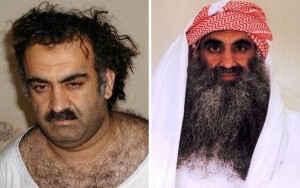 President Obama thought it would be a good idea to try terrorist on American soil with the same rights as American citizens, surprisingly above the rights that American troops have as they go through Military tribunals. Unfortunately for America Obama was dead wrong. Three words.. Khalid Sheikh Mohammed. Judge tosses out most evidence on terrorist Gitmo detainee.

A federal judge has tossed out most of the government’s evidence against a terrorism detainee on grounds his confessions were coerced, allegedly by U.S. forces, before he became a prisoner at Guantanamo Bay.

In a ruling this week, U.S. District Judge Thomas Hogan also said the government failed to establish that 23 statements the detainee made to interrogators at Guantanamo Bay were untainted by the earlier coerced statements made while he was held under harsh conditions in Afghanistan.

However, the judge said statements he made during two military administrative hearings at the U.S. detention center in Cuba, where he was assisted by a personal representative, were reliable and sufficient to justify holding the detainee.

Musa’ab Omar Al Madhwani allegedly engaged in a 2 1/2-hour firefight with Pakistani authorities before his capture in a Karachi apartment in 2002.

The detainee says that after five days in a Pakistani prison, he was handed over to U.S. forces and flown to a pitch-black prison he believes was in Afghanistan. He says he was suspended in his cell by his left hand and that guards blasted his cell with music 24 hours a day.

1 . At the beginning of the trial, once more the brothers must insist on proving that torture was inflicted on them by State Security [investigators ]before the judge.

2. Complain [to the court] of mistreatment while in prison.

3. Make arrangements for the brother’s defense with the attorney, whether he was retained by the brother’s family or court-appointed.

4. The brother has to do his best to know the names of the state security officers, who participated in his torture and mention their names to the judge.[These names may be obtained from brothers who had to deal with those officers in previous cases.]

In Case You Missed It:  George Soros Interested in Funding Reparations Program in Los Angeles, According to Report
Posted in Terrorism, Tyranny and tagged al-Qaida, Cuba, Islam, Obama, Terrorism.