thelastcrusade–Americans are paying highly inflated prices for pharmaceuticals that have been repackaged and sold for 1,000% or more of their cash worth. 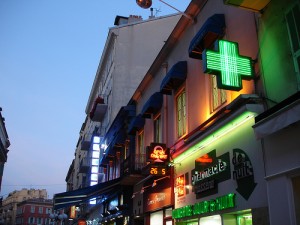 French Pharmacy where the same drugs sell for considerably less

The General Accountability Office has discovered that a pill that can be purchased in Mexico, Israel, and France for $.50 is sold by leading drug companies in the United States for $50.00 and more.

Such price-gouging, however, has received scant scrutiny by the politicians involved in the health care debate.

Vermont Senator Bernard Sanders says a Lipitor prescription sells in Canada for $33. In the U.S., the same prescription costs anywhere from $125 to $250.

But, Mr. Sanders points out, the Senate voted down an amendment to the health-care overhaul that would have allowed the U.S. to import drugs approved by the FDA.

The new GEO study shows that 416 brand-name drug products — representing 321 drug brands — received “extraordinary price increases” of from 100% to 1,000% or more in the past eight years.

More than half of the brand-name drug products that received the price increases were simply repackaged, the GEO reports.

This means the pills were purchased from drug manufacturers or wholesalers and resold in smaller packages to health care providers such as hospitals or physicians in order to maximize profits.

The study notes that the bloated prices for brand-name drugs leads to higher drug spending for public and private insurance plans, hospitals, and other providers that cover prescription drugs.

Larry McNeely, the health-care advocate for the U.S. Public Interest Research Group, says that the inflated prices represent the lobbying muscle of the pharmaceutical industry.

“The drug industry,” Mr. McNeely says, “has been generally supportive of a health-care overhaul because it cut a deal with the Obama administration that it would give up no more than $80 billion in revenue over 10 years. Drug importation would have cost it billions more. White House critics say the industry got a sweetheart deal.”

The Congressional Budget Office estimates the U.S. government could save almost $20 billion on its drug costs over the next 10 years if it could import prescription drugs. Other estimates say consumers would save $100 billion if they could buy their drugs from countries, like Canada, where they’re much cheaper.

An Israeli baby girl was injured when Palestinians threw rocks at the car in which she was riding. The year-old...