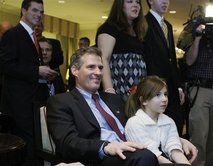 BOSTON – In an epic upset in liberal Massachusetts, Republican Scott Brown rode a wave of voter anger to win the U.S. Senate seat held by the late Edward M. Kennedy for nearly half a century, leaving President Barack Obama’s health care overhaul in doubt and marring the end of his first year in office.

The loss by the once-favored Democrat Martha Coakley in the Democratic stronghold was a stunning embarrassment for the White House after Obama rushed to Boston on Sunday to try to save the foundering candidate. Her defeat signaled big political problems for the president’s party this fall when House, Senate and gubernatorial candidates are on the ballot nationwide.

“I have no interest in sugarcoating what happened in Massachusetts,” said Sen. Robert Menendez, the head of the Senate Democrats’ campaign committee. “There is a lot of anxiety in the country right now. Americans are understandably impatient.”

Brown will become the 41st Republican in the 100-member Senate, which could allow the GOP to block the president’s health care legislation and the rest of his agenda. Democrats needed Coakley to win for a 60th vote to thwart Republican filibusters.

One day shy of the first anniversary of Obama’s swearing-in, the election played out amid a backdrop of animosity and resentment from voters over persistently high unemployment, Wall Street bailouts, exploding federal budget deficits and partisan wrangling over health care.

For weeks considered a long shot, Brown seized on voter discontent to draw even with Coakley in the campaign’s final stretch. His candidacy energized Republicans, including backers of the grass-roots “tea party” movement, while attracting disappointed Democrats and independents uneasy with where they felt the nation was heading.

A cornerstone of Brown’s campaign was his promised vote against the health care plan.

Though the president wasn’t on the ballot, he was on many voters’ minds.

“I voted for Obama because I wanted change. … I thought he’d bring it to us, but I just don’t like the direction that he’s heading,” said John Triolo, 38, a registered independent who voted in Fitchburg.

He said his frustrations, including what he considered the too-quick pace of health care legislation, led him to vote for Brown.

But Robert Hickman, 55, of New Bedford, said he backed Coakley “to stay on the same page with the president.”

Even before the first results were announced, administration officials were privately accusing Coakley of a poorly run campaign and playing down the notion that Obama or a toxic political landscape had much to do with the outcome.

Coakley’s supporters, in turn, blamed that very environment, saying her lead dropped significantly after the Senate passed health care reform shortly before Christmas and after the Christmas Day attempted airliner bombing that Obama himself said showed a failure of his administration.

Days before the polls closed, Democrats were fingerpointing and laying blame.

“President George W. Bush and House Republicans drove our economy into a ditch and tried to run away from the accident,” he said. “President Obama and congressional Democrats have been focused repairing the damage to our economy.”

Wall Street watched the election closely. The Dow Jones industrial average rose 116 points, and analysts attributed the increase to hopes the election would make it harder for Obama to make his changes to health care. That eased investor concerns that profits at companies such as insurers and drug makers would suffer.

Across Massachusetts, voters who had been bombarded with phone calls and dizzied with nonstop campaign commercials for Coakley and Brown gave a fitting turnout despite intermittent snow and rain statewide.

Secretary of State William Galvin, who discounted sporadic reports of voter irregularities throughout the day, predicted turnout ranging from 1.6 million to 2.2 million, 40 percent to 55 percent of registered voters. The Dec. 8 primary had a scant turnout of about 20 percent.

“We don’t want health care just for the rich and the middle class. We need it for everyone,” said Democrat Neicei Degen, 82, who voted for Coakley in hopes of saving Obama’s plan that would extend coverage to millions of uninsured.

Fears about spending drove Karla Bunch, 49, to vote for Brown. “It’s time for the country, for the taxpayers, to take back their money,” she said.

For others, feelings about the candidates themselves shaped their votes.

Recalling that Brown once posed nude for Cosmopolitan magazine, Kaitlin Addams, 50, said she reluctantly voted for Coakley “to make sure the pinup boy doesn’t get into office. I don’t like his stand on issues. He’s an extreme conservative.”

Conversely, Elizabeth Reddin, 65, voted for Brown because she said she was turned off by the Democrat’s negative advertisements, saying: “The Coakley stuff was disgusting.”

In Case You Missed It:  Study may explain left-wing lunacy in big cities: Rise in air pollution leads to severe mental illness
Posted in Freedoms and tagged Democrats, Election, Republicans.

Most countries in the European Union offer universal health coverage for their citizens. And when citizens of one EU country...