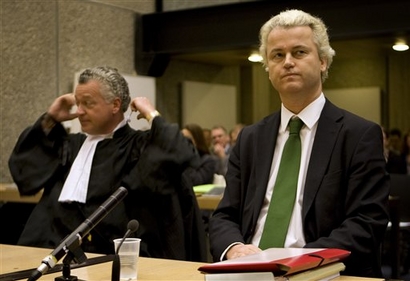 AMSTERDAM – Dutch lawmaker Geert Wilders sat in the defendant’s dock Wednesday, nodding his head as prosecutors read aloud a hundred remarks he has made condemning Islam, Muslims and immigrants — notably one comparing the Quran to Hitler’s “Mein Kampf.”

Wilders’ criminal trial for allegedly inciting hate against Muslims has resonance across Europe: He is one of a dozen right-wing politicians on the continent who are testing the limits of freedom of speech while voicing voters’ concerns at the growth of Islam.

The flamboyant bleach-blond politician has also called for taxing clothing commonly worn by Muslims, such as headscarves, because they “pollute” the Dutch landscape. He may be best known for the 2008 short film “Fitna,” which offended Muslims around the world by juxtaposing Quranic verses with images of terrorism by Islamic radicals.

“I know the words I use are sometimes hard, but they are never impetuous,” he told judges Wednesday.

“I also do not intend to hurt people’s feelings. I have nothing against Muslims. I have a problem with Islam and the Islamization of our country because Islam is diametrically opposed to freedom.”

His lawyer said Wilders is innocent and asked for the charges to be dismissed. Failing that, he wishes to call 17 witnesses, including Mohammed Bouyeri — the Dutch-born Muslim radical serving a sentence of life in prison for the brutal 2004 murder of filmmaker Theo van Gogh. Van Gogh had also incurred Muslim ire for a documentary criticizing Islam, and Wilders has lived under constant police protection since his killing.

Judges will rule on a move for summary dismissal Feb. 3, with the prosecution’s opening statements in March if the case proceeds.

Around 200 Wilders supporters demonstrated outside the court, many carrying signs saying “Stop the Islamization of Europe.”

“There are lots and lots of them (Muslims) who are good people, decent, hardworking people — it’s not about that,” said Jeroen Korthuis, who traveled from the northern province of Friesland to attend the protest. “It’s about their numbers.”

Muslims, mostly from Morocco and Turkey, make up about six percent of the Dutch population of 16 million after a wave of immigration in the 1980s and 1990s.

“We’re afraid that it will be too much. Too much immigration in too little time, in too small a country,” Korthuis said.

“As more and more come here, they will influence your society: beliefs, church, justice system — everything.”

Immigration-related issues have dominated politics in the Netherlands and much of Europe over the past decade. Wilders has drawn comparisons with populists such as Jorg Haider in Austria and Jean-Marie Le Pen in France as he cashed in on the growing unease. His Freedom Party now rivals the Netherlands’ largest, although it has not yet won a place in any governing coalition.

Publicity resulting from previous attempts to stop him from promoting his views — such as the refusal of Dutch television to air “Fitna” and a travel ban imposed by the government of Britain — has only increased his popularity. Many observers expect his trial to have the same effect.

If convicted, he could face a maximum sentence of two years in prison, though a fine of up to euro18,500 ($26,800) is more likely. He could theoretically keep his seat in parliament.

While Wilders supporters see the trial as an attack on of freedom of expression, immigrant groups see it as a test of whether the Dutch government is willing to support minority rights, including freedom of religion and freedom from discrimination — guaranteed in the first words of the Dutch constitution.

Anti-racism groups have long sought Wilders’ prosecution, saying his remarks go beyond being offensive and compound ethnic tensions in the Netherlands, a country once regarded a beacon of tolerance.

“Racist incidents in the workplace are rising, and the labor unions say that too,” said Rene Danen of Nederland Bekent Kleur — Dutch for “The Netherlands Shows Its Colors.” The group was one of several that filed a formal complaint against Wilders. “One in three Muslims here now say they are considering leaving.”

He said Wilders’ remarks clearly violate hate speech laws and his case is no different from many other discrimination suits filed each year.

Sadik Harchaoui, the head of Forum, an institute that promotes integration, said he didn’t see any positive outcome to the case.

“Whatever the verdict may be, it’s going to be another element in polarization,” he said.
Click here to Watch Geerts Movie FITNA

In Case You Missed It:  EXODUS: 40% of residents plan to leave San Francisco as crime rises; 76% call for more police
Posted in Freedoms and tagged Freedom, Geert Wilders, Terrorism.

President Obama's job approval rating has fallen to 46 percent, according to a new CBS News poll. That rating is...