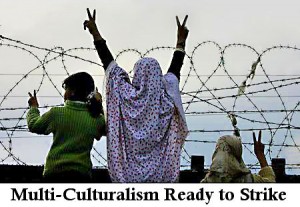 WASHINGTON – Al-Qaeda is training female suicide bombers in Yemen, including at least two who do not look Arab and carry Western passports, ABC reported.

According the report, the current threat is tangible but the female bombers have not yet been sent on their suicide missions.

Former White House counter-terrorism official Richard Clarke reported that al-Qaeda trains the female terrorists in Yemen. American officials have said that a recent US air strike on the terror network’s training camp in the country killed many would-be suicide bombers but not all of them.

According to Clarke, many of the terror activists training at the camp have light skinned and may not look Arab.

US authorities have been preventing suspected terror figures from entering the US ever since the foiled recent attack by a Nigerian terrorist onboard a US-bound plane, ABC said. Six people were prevented from boarding planes headed to American last week, the news network said.

Earlier, Britain raised its terrorism threat level to “severe” – the second highest level –days before London hosts major international meetings on how to deal with militancy in Afghanistan and Yemen

General David Petraeus, head of U.S. Central Command, has proposed more than doubling military assistance for Yemen to about $150 million, but it is unclear how much covert assistance will be provided on top of that.

The State Department is using “diversity visas” to encourage immigration to US from terror-haven Yemen.

Yemen has long been a focus of U.S. security concerns because of terrorist activities there, including not only the 2000 bombing of the U.S.S. Cole but also a 2008 bombing attack on the U.S. embassy. Recently, the concerns about terrorism eminating from Yemen has intensified because Umar Farouk Abdulmuttalab, the Nigerian terrorist who attempted to detonate explosive underwear on a Delta Airlines flight from Amsterdam to Detroit on Christmas Day, reportedly joined an al Qaeda affiliate in Yemen and was groomed there for his would-be suicide attack.

China says it needs no Internet lessons from U.S.

BEIJING (Reuters) - China needs no lessons about its Internet from the United States, the head of an online media...