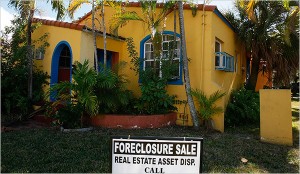 WASHINGTON – Sales of previously occupied homes took their largest drop in more than 40 years last month yet managed to end 2009 with the first annual gain in four years.

Still, prices plunged by more than 12 percent last year — the sharpest fall since the Great Depression. The price drop for 2009 — to a median of $173,500 — showed the housing market remains too weak to help fuel a sustained economic recovery. Total sales for 2009 were nearly 5.2 million, up about 5 percent from 2008.

Last month’s worse-than-expected showing underscores concerns that the housing market could weaken further after March 31, when the Federal Reserve is set to end its program to buy mortgage securities to keep home loan rates low. Once that program ends, mortgage rates could rise. Adding to the worries, a newly extended homebuyer tax credit is scheduled to run out at the end of April.

The numbers “clearly indicate that the rebound in housing demand observed so far has been largely supported by government programs,” Anna Piretti, senior economist at BNP Paribas, wrote in a research note Monday.

December’s sales fell 16.7 percent to a seasonally adjusted annual rate of 5.45 million, from an unchanged pace of 6.54 million in November, the National Association of Realtors said Monday. Sales had been expected to fall by about 10 percent, according to economists surveyed by Thomson Reuters.

The report “places a large question mark over whether the recovery can be sustained when the extended tax credit expires,” wrote Paul Dales, U.S. economist with Capital Economics.

The median sales price for December was $178,300, up 1.5 percent from a year earlier and the first yearly gain since August 2007. But some of that increase could be due to a drop-off in purchases from first-time buyers who tend to buy less expensive homes.

A healthy real estate market is needed to help the economy continue recovering from recession.

Last year, first-time buyers were the main driver of the housing market. But their role is shrinking. They accounted for 43 percent of purchases in December, down from about half in November, the Realtors group said.

The inventory of unsold homes on the market fell about 7 percent to 3.3 million. That’s a 7.2 month supply at the current sales pace, close to a healthy level of about six months.

Lawrence Yun, the Realtors’ chief economist, cautioned that the recovery will depend on whether the economy starts adding jobs in the second half of the year.

Total sales for 2009 closed out the year at 5.16 million, up about 5 percent from a year earlier. And some real estate agents say they feel encouraged. More buyers are shopping around this month than in a typical January, said Kevin O’Shea, an agent with Homes of Westchester Inc. in White Plains, N.Y.

“There are indications that the economy is coming back, and that makes buyers feel more secure to purchase,” he said.

But many analysts project that home prices, which started to rise last summer, will fall again over the winter. That’s because foreclosures make up a larger proportion of sales during the winter months, when fewer sellers choose to put their homes on the market.

Despite fears that home prices are starting to fall again, some analysts still say the worst is over.

“We do not believe it is fair to consider this a double dip in the housing market,” Michelle Meyer, an economist with Barclays Capital, wrote last week. “The recovery is still under way but hitting some bumps in the road.”