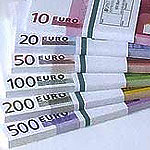 The dollar is on its way out, and the euro is on its way in as the world’s main reserve currency, says David Roche, global strategist at Independent Strategy.

The euro will take over because Europe has a more solid fiscal policy than the U.S., he says.

While many experts have said the deteriorating finances of Greece and several other countries in the euro zone put the entire European Monetary Union at risk, Roche disagrees, CNBC reported.

He thinks the stronger European nations will refuse to bail out the weak, boosting the euro.

“The Germans . . . are not prepared to put up with this sort of shenanigans and straight outright mendacity which they have had to endure from the likes of Greece. So what they are doing is hanging Greece out to dry.”

So Germany will guide Europe back to fiscal balance, while the U.S. continues to rack up huge budget deficits, Roche maintains.

Not everyone is so optimistic about the euro.

“The longer it lasts, the more painful the ultimate exit will be,” he told Bloomberg.