FOUNDING FATHERS SPINNING IN THEIR GRAVES
REFUSE THE JIZYAH 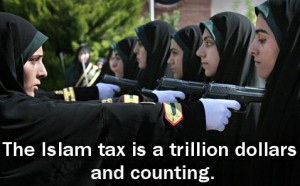 thelastcrusade–Look at your next airline ticket and you will find a “Security Fee”. What is the Security Fee that was passed after September 11, 2001? It is an Islam tax. It is more money out of an American’s pocket to pay for the privilege of living with Muslims amongst us.

It turns out that we pay an enormous amount of money for our life with Islam. Let’s look at a list of expenses that we bear because of Islamic ideology. If there were no Islam we would not have the Transportation Security Administration, Homeland Security, the Iraq war, the Afghanistan war, all that so-called terrorist work by the FBI, rebuilding the World Trade Center and who knows what else. The Iraq war has cost about $700 billion, the Afghan war has cost about $250 billion and all of the government agencies cost in the neighborhood of tens of billions per year. We are up to at least a TRILLION dollars of our Islam tax. That little $10 Security Fee may seem small, but that is for every round trip ticket sold in the US. What will the trial in NYC for Khalid Sheikh Mohammed cost? Millions of dollars. And the hits just keep coming.

Another part of the Islam tax is the jizyah (the dhimmi tax) that we call foreign aide. We pay various Islamic governments, including Egypt, Pakistan, the so-called Palestinians and others. Why do we pay the jizyah? We want to be friends (Never mind the 12 verses in the Koran that say that Muslims are never the friends of kafirs, unbelievers).

We are bringing Muslim refugees into America where they receive more benefits than American citizens, another Islam tax.

Why did Islam attack the World Trade Towers? Because they were the World TRADE Towers, an economic target. What was the purpose? To destroy the economy of America.

The Islam tax is a trillion dollars and counting. If we did not have this tax, it would certainly ease the economic crunch we have today.

As soon as Mohammed started his jihad, he warred against the economy of the kafirs. He kept up a running attack on the trade caravans of Mecca. When he attacked one tribe of Jews in Medina, he destroyed their economic base—their date palm plantations. This act was against the Arab customs of war, but Allah said it was a good thing. When he attacked Taif, he destroyed their plantations as well. Economic war.

One of his last acts was to attack the Christians north of Medina. Once he had crushed them, he made them pay the jizyah tax (the dhimmi tax). He did the same to the Jews of Khaybar. The jizyah tax was 50% of their income.

All Islam has to do is to keep up the attack. It does not matter whether they win or lose a particular battle. The more Islam practices jihad, the more we deny it and create some governmental nightmare that avoids the ideological war with Islam, but costs a fortune. Our self-deception is bankrupting us.

Islam produces poverty. Without oil, the income to all of the Arabic nations is less than that of Spain. This is not an accident. Mohammed was a businessman, but after he became a prophet, all of the money he made came from the loot from his victims, not a great business model. Mohammed knew how to bleed his enemies dry. We are bleeding today as a result of the Islamic war against the kafirs.

But Islam does not just tax kafirs for money. Kafirs have to submit to Sharia law and this means the loss of freedoms. Only Muslims are allowed to dictate what is taught about Islam in our schools. Islam gains the benefits of a deceitful history lesson, and we lose our freedom of speech. This is a tax on our Constitutional freedoms.

So now in America, kafirs are poorer and Muslims are richer because of Islam.

In Case You Missed It:  Following release of Pfizer’s latest “booster” covid shots, excess deaths in Japan are up 400%
Posted in Freedoms, Terrorism and tagged Council on American-Islamic Relations, Islam, Terrorism.

Tonight, Barack Obama said, "To close that credibility gap we must take action on both ends of Pennsylvania Avenue to...