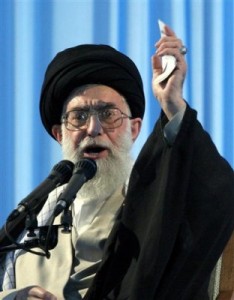 Supreme leader Ayatollah Ali Khamenei said on Monday that Iran is set to deliver a “punch” that will stun world powers during this week’s 31st anniversary of the Islamic revolution.

“The Iranian nation, with its unity and God’s grace, will punch the arrogance (Western powers) on the 22nd of Bahman (February 11) in a way that will leave them stunned,” Khamenei, who is also Iran’s commander-in-chief, told a gathering of air force personnel.

The country’s top cleric was marking the occasion when Iran’s air force gave its support to revolutionary leader Ayatollah Ruhollah Khomeini, a key event which led to the toppling of the US-backed shah on February 11, 1979.

His comments came as Iran said it would begin to produce higher enriched uranium from Tuesday, in defiance of Western powers trying to ensure the country’s nuclear drive is peaceful.

This year’s anniversary is expected to become a flashpoint between security forces and supporters of opposition leaders Mir Hossein Mousavi and Mehdi Karroubi, who charge that the June re-election of President Mahmoud Ahmadinejad was rigged.

Opposition supporters are expected to stage anti-government protests on Thursday when the traditional regime-sponsored marches to mark the revolution take place across the country.

Mousavi renewed his call for demonstrations on the February 11 anniversary.

Just over a week ago, he and Karroubi had implicitly called for a gathering of their supporters.

“The 22nd of Bahman is upon us, truly it should be called the day of gathering,” Mousavi said on his Kaleme.org website Monday.

“I feel we have to participate while maintaining the collective spirit as well as our identity and leave an impression,” Mousavi said.

“Anger and bitterness should not take our control away.

“The clerics should know that since imprisonment, beatings, and other confrontational methods are done in the name of Islam and the Islamic regime, it is hurting Islam and we all should try to stop,” he added.

Anti-government protests were first triggered after the June 12 presidential election won by Ahmadinejad.

Over the past eight months, several thousand people were arrested. Some were released and others were given hefty prison terms, among them politicians, journalists and human rights activists.

Two protesters were tried, convicted and hanged in the aftermath of the election.

Khamenei told the air force personnel the “most important aim of the sedition after the election was to create a rift within the Iranian nation, but it was unable to do so and our nation’s unity remained a thorn in its eyes.”

In Case You Missed It:  Can SNL Draw Line Between Humor and Hate? (VIDEO)
Posted in Terrorism and tagged Ahmadinejad, al-Qaida, Iran, National Council of Resistance of Iran, Terrorism.

SMARTER, English-speaking migrants who want to work in Australia will jump the queue under a major immigration shake-up to be...