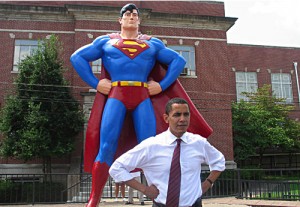 WHEN Barack Obama took office last year he was compared to Superman, even joking at a dinner that he had been “born on Krypton and sent here … to save the planet Earth”. Last January he appeared on the cover of Spider-Man.

Now, with his legislative agenda in tatters, the president has moved from comic-strip hero to comparisons to one of the great flawed figures of American literature. Ten days ago Charlie Cook, a leading election analyst, compared Obama and his battle to push through healthcare reform to Captain Ahab and his suicidal hunt for the great white whale.

Despite poll after poll showing that Americans’ main priority is jobs, the president has focused on reforming the US healthcare system and extending coverage to the 40m citizens with no insurance.

“I think choosing to take a Captain Ahab-like approach to healthcare — I’m going to push for this even in the worst downturn since the Great Depression — is roughly comparable to Bush’s decision to go to war [in Iraq],” Cook told Politico. “It basically destroyed the first year of a presidency.”

Obama made a last-ditch attempt last week to secure opposition support through a seven-hour summit shown live on television. Although he was admired for his unflappable handling of 40 legislators, no progress was made as Republicans called for a clean sheet. “Boy, that didn’t work,” wrote Peggy Noonan, the veteran Republican commentator, in Friday’s Wall Street Journal.

With both sides so entrenched, she was not alone in regarding the summit as a waste of time. CNN described it as “theatre of the absurd”. Dick Morris, political consultant and former adviser to the Clinton administration, said, “I think it’s Romeo and Juliet. The two families fighting.”

Winning over the Republicans may not have been the real objective. “Obama never expected some magical epiphany from the Republicans,” said Earl Ofari Hutchinson, a political analyst. “He achieved the point, which was to give the message to the nation that we all agree we need healthcare and it is the Republicans obstructing everything, not us.” The president is left with an unenviable choice. Either he moves on to other priorities or he uses what is still the biggest Democrat majority in 30 years to push legislation through, via a process called reconciliation.

“He’s damned if he does, damned if he doesn’t,” said Douglas Rivers, professor of political science at Stanford University. “If he rams it through it will be perceived as hardball politics. But the alternative of getting nothing through will be viewed as a political catastrophe.”

The irony is that Obama got close to netting his Moby Dick. After months of wrangling, the Senate voted on Christmas Eve to pass a bill for universal coverage. It seemed the best possible Christmas present. The Democrats had already pushed a bill through the House and all that remained was to combine the two into law.

They had barely digested their turkey when the unexpected victory of Scott Brown in the late Ted Kennedy’s Senate seat in Massachusetts in mid-January robbed the Democrats of the 60 votes they need for easy passage in the Senate.

Health reform seemed written off, particularly as polls showed Brown’s opposition to the bill was key to his victory. But Obama refused to give up.

Most Americans support the benefits promised in the House and Senate bills. These include banning insurance companies from screening out customers with pre-existing conditions, such as diabetes.

The problem is that by equally large margins Americans oppose all the things necessary to pay for these reforms, in particular the $500 billion (£330 billion) cuts in payments to Medicare, the healthcare system for pensioners.

Obama’s case was not helped by a last-minute resort to traditional pork-barrel politics to get the Senate bill passed by his own party. Special deals included giving trade unions a tax loophole on their members’ more lavish plans. The crucial vote from Ben Nelson, the Nebraska Democrat, came only after the federal government agreed to pay his state’s extra costs for Medicaid, a health programme that provides limited help for the poor.

After such a struggle, Obama’s team is insistent that it will not give up and has set a time-frame of a month to six weeks to pass legislation. “We are determined that we are going to pass healthcare reform,” vowed Nancy Pelosi, the House Speaker.

Robert Gibbs, the White House press secretary, said Obama will make an announcement this week about the “way forward”. He cited potential areas of agreement with Republicans, such as imposing ceilings on payouts in cases of medical malpractice and curbing Medicare fraud.

In a rare show of bipartisanship last week, a number of Republican senators voted for Obama’s jobs bill. But Republican support for his healthcare reform is something perhaps only Superman could achieve and the president will instead have to rely on rallying his own party. With mid-term elections looming in November and many Democrats’ seats in danger, they will be reluctant to support an unpopular bill.

Obama has said healthcare is so important that he will get it through even if it means he ends up as a one-term president, like Jimmy Carter. He may get his wish. The latest poll by CNN/Opinion Research found 52% of Americans think he should serve only one term.

In Case You Missed It:  The UK Moves Closer to 1984
Posted in Tyranny and tagged American Presidents, Obama, Obamanomics.

Is There a Philosophy of Hypocrisy?

by Victor Davis Hanson Here are a few things that I think don’t quite compute. 1) The now familiar Palin/Edwards...