Here are a few things that I think don’t quite compute. 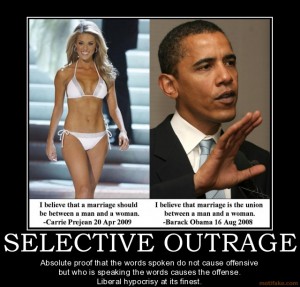 1) The now familiar Palin/Edwards dichotomy. John McCain was damned for picking Sarah Palin who had not finished her first term as governor, and had previously only been elected to local political offices and served on a state commission.

Her middle American ‘you betcha’ twang, NASCAR persona, good looks, and occasional deer-in-the-headlines interviews with hostile anchor people, coupled with the kids, conservative creed, Christianity, and 19th-century husband, sickened — there is no other word for it — the DC-New York punditocracy. Yes, they concluded, she really was from Wasilla. Yuk!

So we got everything in the media from the maverick McCain suddenly as cynical sell-out who settled for third-best, to Palin, the clueless Alaskan yokel.

In contrast, to this day, there is no in-depth analysis of Kerry’s disastrous pick of the first-term, uninformed Senator Edwards as his VP choice in 2004. And it took the National Enquirer to inform us of his later conspiratorial lying and bribery involving his illegitimate child — sordid facts apparently well known to — and hushed up by — the mainstream media. Remember, later presidential candidate Edwards was not just inexperienced, but as a confessed wonk, did not open a book. He was the owner of a mansion who preached about “two-nations” inequality, and he alternately used and humiliated his alternately heroic and conniving cancer-stricken spouse.

B) The responsible Times. For much of 2002-8, the New York Times leaked classified information about U.S. policy in the war on terror and gave up on Iraq (though John Burns, its military correspondent, was quite professional and courageous). Indeed, the serial story of Iraq was the IED, not the heroic capture of Fallujah or the stunning success of the surge. The Times gave a discount to Moveon.org to run its “General Betray-Us” ads at a time thousands of young Americans were fighting for their lives during the surge.

And now? The Times admirably sat on advanced warning of the current NATO offensive in Afghanistan; its editor emphasized that the paper was “responsible” in reporting matters of national security (i.e. the Times does not leak). Our current efforts in Helmand Province now are portrayed in the media in the manner of Patton’s WWII offensives — thank God for that.

C) The war on terror. For much of the Bush administration, one would have thought the Constitution had been shredded. My God — Tribunals! Renditions! Guantanamo! Patriot Act! Intercepts! Wiretaps! Iraq! Predator drones!

Indeed, for each of those ACLU talking points, then candidate Obama reflected the media outrage and damned these protocols. Yet suddenly, there is no in-depth critical analysis of these policies. Most are now kept and apparently thought by government and media to be of both utility and morality by virtue that Obama adopted them.

In some cases, rhetoric suffices. Guantanamo is now “virtually” closed, in the manner KSM will be virtually tried in New York. Assert rather than enact and a sort of virtual nirvana follows in the media.

Not long ago, we were to charge or investigate former administration and CIA officials for ordering the waterboarding of three confessed terrorists, among them Khalid Sheik Mohammed, the proud father of 9/11. And now? The number of Predator drone assassination missions has increased enormously. Apparently in this new age of war as a criminal justice matter, somehow the Bush-era coerced interrogations of confessed mass-murderers deserved popular outrage and were to be considered crimes, while the judge/jury/executioner sentences passed down on suspected terrorists (again, dead men need no Miranda rights) — and anyone in their general vicinity when the hellfire missile hits — are well, like renditions and tribunals, suddenly problematic.

D) Good, then bad, D.C. A year ago, government was at last working. Supermajorities were in both houses of congress. The Senate was filibuster proof, in a way the poor Republicans had not been able to achieve during the 2005 Bush efforts to reform Social Security.

Obama was on nearly every magazine cover, his visage popped up on the evening newscasts. Pundits wrote puff pieces about “inside” interviews. Healthcare, cap and trade, borrowing, bail-outs, more stimuli, cash for clunkers, all this and more needed no Republican input with such supermajorities in congress.

The system was working as it was designed; to paraphrase the president, ‘we won and you lost’. A recalcitrant liberal Senator here and there could always be bought off with a $300 million earmark. Polls hit near 70% approval. The Europeans went Ga-Ga. Government was moving again.

Now? Filibusters are Satanic. If one were to read the papers or listen to the administration, partisanship is toxic. The very system itself is broken. We are ungovernable.

Liberal pundits deride us as clueless or selfish or worse still. China’s autocrats, in contrast, are at least efficient in matters of green energy compared to us. These are all to be accepted as principled observations and are apparently not predicated on a below 50% presidential approval rating, failed legislation, a nearly $2 trillion annual deficit, tea party revolts, the conservative wins in the governor races in Virginia and New Jersey, and the loss of Ted Kennedy’s senate seat.

The weird and sudden concern about a White House summit, a national commission on the debt, and worries about filibusters have nothing to do with the specter of a Democratic catastrophe in the November 2010 elections — or so we are to believe.

I’ll stop there. Readers, you have far more examples, no doubt.

Is all this hypocrisy simply liberal-conservative politics, Democratic-Republican ying and yang? After all, there is a lot of hypocrisy as well on the Republican side — the traditionalists embracing nearly $3 trillion in Bush deficits over eight years, the Republican culture of corruption in the 2004-6 Congress, etc.

But “just politics” does not quite explain the advocacy of the media, the universities, the foundations, the arts, the legal community, the judiciary, and creative communities, whose zealotry is reserved for the Left.

So what explains the treatment of an Edwards versus Palin, or a war as lost versus one as necessary and well conducted, or Guantanamo for confessed terrorists as gulag but execution for suspected terrorists as legitimate, or Obama as principled hyper-partisan suddenly principled bipartisan?

1) Egalitarianism and equality trump all — whether freedom, individualism, or personal liberty. Usually a great deal of education, or capital tends to convince us that in a perfect world, people like us who have money or have wisdom, could make others like us, rather than allow them to continue to suffer in poverty and ignorance.

This drive transcends the desire to contribute to charity, or to befriend the poorer neighbor or relative, but is cosmic in nature, overarching, all powerful, all-wise, and so by needs remote. So note here — and this is critical — the anointed utopian usually lives in a world — a better world — not subject to his own strictures. (Have Sarah Palin support abortion, call for cap and trade, or talk about the need for socialized medicine, and we would see inspirational stories of her fishing in waders to feed her below-the-poverty-line noble brood, not that she makes lots of money speaking).

Tax avoidance, ample square footage, ample energy use, networking, insider influence, prep schools for one’s progeny? All these are no more common or rare among crusading egalitarians than among elfish elitist conservatives. That raises the question — is utopianism naïve, or is it a psychological mechanism that serves not just to alleviate guilt, but perhaps even to contextualize one’s own privilege? E.g., “my riches are really used to help others and only incidentally provide me with an ample lifestyle, that of course, allows me to be an even more effective advocate.” Angels need ample wings.

2) Power. The administration of mercy and compassion requires a properly gifted technocracy, often one well paid and quite influential. If hundreds of millions are to receive entitlements, millions must disperse them, and thousands must administer the millions, and hundreds must oversee the thousands — and that usually means a lot of money and power accrue to a very few. You object that those good billets only pay $150-200,000. Well, maybe, in theory, but there are perks, all sorts of tenure, and inside contacts that come with them — and none of the grief of running the furniture store or putting on braces all day. Big government can house all sorts of needy philanthropists.

The progressive impulse is often tied to career advancement.

3) Words matter, deeds don’t. The talking heads, the lawyers, the professors, the actors, the politicians, the journalists, like the background of the president and most of his cabinet, mostly all work with words. If they sound smart, presto, they must be. Take a brilliant tongue-tied engineer and he is an ignoramus compared to an idiotic smooth talker. Much of the apparent hypocrisy derives from the best and brightest being smart because they advance that impression so well. John Edwards and Barack Obama are cases in point; they exude ignorance so smoothly. And that, in this often zero-sum game, beats real intelligence and experience that are so often hidden.

Abstract utopianism is best advanced in theory by those who worry less about implementation.

4) The tragic view is, well, tragic and hard to endure and does not excite. The notion that humans don’t surprise us in their selfish appetites is nothing to become excited about. The Enlightenment notion that we are all good and prove ourselves so with education and capital is something to sing, even yell, slander, and slur for. In contrast, accepting the need for military preparedness and deterrence, or removing the incentives for humans to become idle, is not something to write enthusiastically about. What teenager wants to hear from his dour father that you can’t print money, and that he must pay back his maxed out credit card?

It is fun and nice to be therapeutic, unpleasant and mean to accept tragedy.

Add all this up, hypocrisy vanishes, and revolutionary pigs walk on two legs in the farmhouse — an Edwards is mellifluous, puts his energy on behalf of those in the “other nation,” and is devoted to promoting a society where we are all about as wealthy as John Edwards, who uses his wealth for proper contemplation and preparation for further good deeds, and thus needs a castle of compassion. Given that, who cares that he is a congenial liar, lives one way, lectures another, helped destroy the practice of obstetrics in his home state, and took a great deal of money for doing very little? The former considerations alone count, the later are mere right wing talking points.

In Case You Missed It:  Democrats Open Borders Policies Believed To Be Cause Of Child Sex Trafficking Ring
Posted in Tyranny and tagged Democrats, Liberalism, Obama.

Jamie Dimon, chairman of JP Morgan Chase, has warned American investors should be more worried about the risk of default...