Embattled Rep. Eric Massa used his final hours in office to settle scores with White House Chief of Staff Rahm Emanuel, House Majority Leader Steny Hoyer and other Democrats he claims are pushing him out of office to clear the way for health care reform. 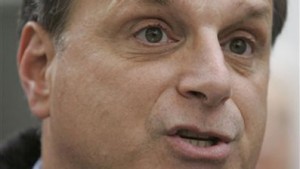 It sounds like the kind of bad dream that only congressmen have — White House Chief of Staff Rahm Emanuel, stark naked, approaches you in the locker room to give you a piece of his mind for not supporting the president’s budget.

Only this actually happened, according to Rep. Eric Massa, the embattled New York Democrat who resigned Monday and used his last hours in office to settle some scores with party leaders.

He reserved his most excoriating stuff for Emanuel, whom he called “son of the devil’s spawn” on his weekly radio show Sunday

“He is an individual who would sell his mother to get a vote. He would strap his children to a front end of a steam locomotive,” Massa said. Illustrating his point, he told the story of how he winded up in an argument with the chief of staff while they were both naked in the congressional gym showers.

Massa said Emanuel came up to him last year, shortly after he entered Congress, while he was trying to clean up to give him grief about a budget vote.

“I’m sitting there showering, naked as a jaybird, and here comes Rahm Emanuel, not even with a towel wrapped around his tush, poking his finger in my chest, yelling at me because I wasn’t gonna vote for the president’s budget,” Massa said. “Do you know how awkward it is to have a political argument with a naked man? … It’s ridiculous.”

He continued, “By the way, what the heck is he doing in the congressional gym? He goes there to intimidate members of Congress.”

Massa, 50, announced last Wednesday that a recurrence of cancer made him decide not to seek re-election in the fall. But two days later, following persistent reports about an Ethics Committee inquiry into inappropriate remarks made to a male staffer, he announced he would resign.

In what may be his parting shot, he used his 90-minute local radio show on WKPQ-FM to defend himself against criticism, accuse House Majority Leader Steny Hoyer of lying and charge the Democratic Party with pushing him out of Congress in order to pass health care reform.

The Obama administration denied the latter charge. A White House official told Fox News that Massa’s allegation is “ridiculous and there’s no truth to it.” Massa, who supports a robust government health insurance plan, was one of 39 House Democrats who voted against the health care bill last year

But on Sunday, the first-term congressman claimed that the “forces that be” orchestrated a character assassination against him to push him out for the sake of the health care bill.

“Mine is now the deciding vote on the health care bill and this administration and this House leadership have said, quote-unquote, they will stop at nothing to pass this health care bill, and now they’ve gotten rid of me and it will pass. You connect the dots,” Massa said.

“The future of the Democratic Party rests on passing this health care bill. They can get anyone to say anything about me concerning anything at all and in fact they did.”

Massa said the incident that got him in trouble, and supposedly gave his rivals leverage against him, occurred at a staff member’s wedding reception on New Year’s Eve.

“I was with my wife. And in fact we had a great time. She got the stomach flu,” he said.

Massa said he had just gotten up to sing Auld Lang Syne and had finished dancing with the bride and bridesmaid — in full view of cameras — when he sat back down at a table with male staff members.

That’s when he made the “inappropriate” remark.

“One of them looked at me and, as they would do after, I don’t know, 15 gin and tonics, and goodness only knows how many bottles of champagne, a staff member made an intonation to me that maybe I should be chasing after the bridesmaid, and his points were clear and his words were far more colorful than that.

“And I grabbed the staff member sitting next to me and said, ‘Well, what I really ought to be doing is fracking you,'” he said.

“And then [I] tousled the guy’s hair and left, went to my room, because I knew the party was getting to a point where it wasn’t right for me to be there. Now was that inappropriate of me? Absolutely. Am I guilty? Yes.”

But Massa said the staff member “never said to me that he felt uncomfortable” and “never went to anybody.”

Rather, he said “somebody went to another staff member who was uncomfortable for him. It was a third-party political correctness statement.”

Massa said he didn’t know about the substance of the harassment complaint until after he announced he would not seek re-election — he said he caught wind of an ethics inquiry after the wedding, but assumed it was about a separate matter.

And he said the accounting provided by Hoyer and his staff is a fabrication.

Hoyer’s office claims the majority leader’s staff was notified the week of Feb. 8 about the allegations, that Hoyer was “immediately informed” and that he told his staff that Massa should refer the matter to the Ethics Committee within 48 hours, or he would do so himself. According to Hoyer’s office, Hoyer learned “within 48 hours” from the ethics committee staff and Massa’s staff that the Ethics Committee had been contacted.

“Steny Hoyer has never said a single word to me at all, not ever, not once,” Massa said on Sunday.

“Not a word. This is a lie. It’s a blatant false statement. And that’s what triggered me to understand what in fact is going on.”

Hoyer, though, did not claim he spoke directly to Massa.

“Mr. Hoyer was asked if he knew of the allegations before they were made public, and he answered yes,” Hoyer spokeswoman Katie Grant said Monday when asked about Massa’s radio show. “We then released a statement clarifying his knowledge of the situation.”

In Case You Missed It:  WORRIED? Biden Advisers Pushing Him For Early Launch Of 2024 Presidential Campaign
Posted in Tyranny and tagged Democrats, Healthcare.

States have an extensive and complicated shared power relationship with the federal government in regulating various aspects of the health...