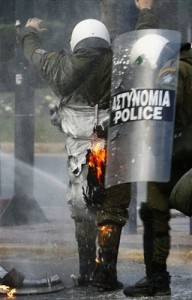 Greece this past weekend saw the worst rioting since the debt crisis began. After Athens had announced new tax hikes and budget cuts to reduce a deficit of 13 percent of gross domestic product, mobs drove guards from Greece’s Tomb of the Unknown Soldier and attacked police.

In our own country, students, teachers and administrators at UC-Berkeley held a “Strike and Day of Action to Defend Education” to demand more money from taxpayers — for themselves.

How badly are they suffering?

According to Peter Robinson of Hoover Institution, California spends $13,000 per student in the state system, compared to $6,000 in New York.

Yet riots in Greece and demonstrators in California do portend a time of troubles. For the budget cuts and tax hikes needed to keep the welfare states of Europe operating as populations age and fewer children are born will be staggering and endless.

And, in the U.S., California is where we all are headed.

Nevada, Arizona and New Jersey are staring at budget gaps of 25 percent. New York and Illinois are not far behind. Michigan has an unemployment rate of 14 percent. Detroit is the quintessential sick city.

Republicans may get by this fall surfing an anti-government wave. But they will soon have to reveal where exactly they propose to cut.

Fortunately, good politics and good policy give the same answer. USA Today’s lead story on Friday — “It Pays to Work for Uncle Sam” — contrasted the wages and benefits of federal workers with those of employees in the private sector.

Nurses employed by Veterans Affairs hospitals earn an average of $74,460 a year, which is $10,689 more than private-sector nurses.

Chris Edwards of Cato Institute has compared the pay and benefits of local and state government employees with private-sector workers.

He found the average hourly compensation, wages and benefits of state and local government employees in 2009 was $39.66 per hour, 45 percent higher than the $27.42 per hour package of private-sector workers

Where 80 percent to 90 percent of state and local government employees get paid sick leave, health insurance and life insurance, and 90 percent receive pensions, that is true of only 59 percent to 71 percent of workers in the private sector.

These disparities suggest that government work is becoming a sweet deal for those who can get it, which may explain why government has begun to crush the private sector that has to carry the government on its back.

Consider. Between 2000 and 2010, U.S. manufacturing, backbone of the nation, lost 5.7 million jobs, one-third of all the manufacturing jobs America had. But government employment rose that same decade by 1.9 million jobs to 22 million, with three-fourths of the new workers being added to local government payrolls.

States like California, whose public employees are among the best paid in the nation, are the states closest to chapter 11. Their last, best hope to close their deficits is a U.S. taxpayer rescue a la Fannie, Freddy, GM and AIG. But do the states merit a taxpayer bailout if their crises come out of their own continuing profligate ways?

“In California, there are 6,144 retired public employees in the CalPERS plan and 3,090 retired teachers in the state teachers’ plan receiving annual pension benefits of more than $100,000.”

And folks wonder why California is bankrupt. Should middle-class Americans be forced to subsidize $100,000-a-year pensions for middle-aged California retirees?

Yet, Barack Obama, Nancy Pelosi and Harry Reid, in that $787 billion stimulus bill, shoveled billions of federal tax dollars into California to pay salaries, pensions and health benefits of Californians who have been paid more than private-sector workers all of their lives. Where is the fairness here?

Not another federal dime should go out to any state government whose employees receive more in pay and pensions than the average worker in that state or the other 49.

As for the U.S. government, Republicans should call for a one-year freeze on federal salaries and a two-year freeze on congressional salaries. If sacrifices are to be made, the people who had a fat decade at taxpayers’ expense should make them sacrifice, not a ravaged private sector that has contributed almost all of the conscripts to today’s 15-million-man army of the unemployed.

In Case You Missed It:  Mother of US Marine Brings “I Don’t Kneel” Sign to College Game Day
Posted in Financial, Freedoms and tagged California, Debt, Governments, Greece, Recession.

The authorities of the United Arab Emirates made an unusual decision. Dubai police chief Dahi Khalfan al-Tamim said on March...