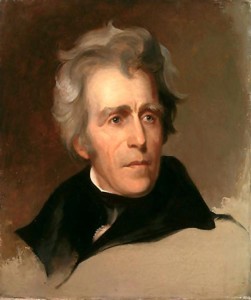 On this day in 1833, President Andrew Jackson announces that the government will no longer use the Second Bank of the United States, the country’s national bank. He then used his executive power to remove all federal funds from the bank, in the final salvo of what is referred to as the “Bank War.”

A national bank had first been created by George Washington and Alexander Hamilton in 1791 to serve as a central repository for federal funds. The Second Bank of the United States was founded in 1816; five years after this first bank’s charter had expired. Traditionally, the bank had been run by a board of directors with ties to industry and manufacturing, and therefore was biased toward the urban and industrial northern states. Jackson, the epitome of the frontiersman, resented the bank’s lack of funding for expansion into the unsettled Western territories. Jackson also objected to the bank’s unusual political and economic power and to the lack of congressional oversight over its business dealings.

Jackson, known as obstinate and brutish but a man of the common people, called for an investigation into the bank’s policies and political agenda as soon as he settled in to the White House in March 1829. To Jackson, the bank symbolized how a privileged class of businessmen oppressed the will of the common people of America. He made clear that he planned to challenge the constitutionality of the bank, much to the horror of its supporters. In response, the director of the bank, Nicholas Biddle, flexed his own political power, turning to members of Congress, including the powerful Kentucky Senator Henry Clay and leading businessmen sympathetic to the bank, to fight Jackson.

Later that year, Jackson presented his case against the bank in a speech to Congress; to his chagrin, its members generally agreed that the bank was indeed constitutional. Still, controversy over the bank lingered for the next three years. In 1832, the divisiveness led to a split in Jackson’s cabinet and, that same year, the obstinate president vetoed an attempt by Congress to draw up a new charter for the bank. All of this took place during Jackson’s bid for re-election; the bank’s future was the focal point of a bitter political campaign between the Democratic incumbent Jackson and his opponent Henry Clay. Jackson’s promises to empower the “common man” of America appealed to the voters and paved the way for his victory. He felt he had received a mandate from the public to close the bank once and for all, despite Congress’ objections. Biddle vowed to continue to fight the president, saying that “just because he has scalped Indians and imprisoned Judges [does not mean] he is to have his way with the bank.”

On September 10, 1833, Jackson removed all federal funds from the Second Bank of the U.S., redistributing them to various state banks, which were popularly known as “pet banks.” In addition, he announced that deposits to the bank would not be accepted after October 1. Finally, Jackson had succeeded in destroying the bank; its charter officially expired in 1836.

Jackson did not emerge unscathed from the scandal. In 1834, Congress censured Jackson for what they viewed as his abuse of presidential power during the Bank War.

In the end, Jackson sold off a lot of Federal land to pay off the massive federal debt!

Biddle, back then is like Geithner today! Only Geithner is much worse, controling World money supply. In the end he saved the Union from ruin.

In Case You Missed It:  Biden Laughs After Trevor Noah Roasts Him: “Since You’ve Come Into Office, Things Are Really Looking Up – Gas Is Up, Rent is Up, Food is Up!” (VIDEO)
Posted in Financial and tagged Alexander Hamilton, American Presidents, Federal Reserve, Jackson, United Socialist States of America.