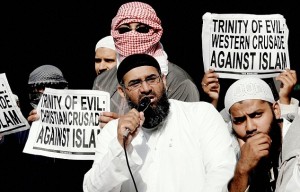 If the stakes were not so high, the situation with Islam in the West would be comical. First we hear about Churches in the UK supporting Islam, and now look at this article in which a UK Muslim leader has stated the harsh reality of Islam. That it is not a religion of peace. Unfortunately dealing in reality is not a strong point of many non-Muslim Westerners today.

Hat to The Religion of Peace.

UK Muslim Leader: Islam Not a Religion of Peace

WASHINGTON — The Obama administration has released a review of its strategy in the war on terrorism. The report failed to even mention the word “Islam.”

CBN News traveled to London to talk with Anjem Choudary, a leading Muslim radical who says Islamic teachings are what shaped his pro-jihad message.

Although both George W. Bush and Barack Obama have declared that Islam is a religion of peace, Choudary begs to differ.
A Religion of Peace?

Choudary is the leader of Islam4UK , a group recently banned in Britain under the country’s counter-terrorism laws. He wants Islamic Sharia law to rule the United Kingdom and is working to make that dream a reality.

While Islamic radicals in the United States usually prefer to speak in more moderate tones while in public, masking their true agenda, Choudary has no such inhibitions.

He has praised the 9/11 hijackers and has called for the execution of Pope Benedict. He also stirred controversy recently when video emerged of him converting a 10-year-old British boy to Islam.

Choudary told CBN News his group is a “non-violent political and ideological movement” that resides in the UK under “a covenant of security.”

Yet he openly praises violent jihad.

“The Koran is full of, you know, jihad is the most talked about duty in the Koran other than tawhid — belief,” he said. “Nothing else is mentioned more than the topic of fighting.”

Several former members of Choudary’s group have been arrested on terrorism charges.

“A very significant amount of former al-Muhajiroun people were involved in terrorist plots against this country,” London-based terrorism expert Peter Neumann said. “A number of people have actually gone to Afghanistan, joined the Taliban and died fighting for the Taliban.”

Choudary refuses to condemn acts of terror including 9/11 and the July 7, 2005 London bombings, which killed 52 people.

CBN News asked Choudary for his thoughts on the 7/7 bombings on London’s transport system, and whether he condemned them.

“For the people who carried it out, it was legitimate,” he replied. “If you look at the will of the 7/7 bombers Mohammed Siddique Khan and Shehzad Tanweer, they would be justified. And there are many verses from the Koran and many statements to say that’s the Islamic argument. And that is a difficult Islamic argument to refute. And there are many scholars who support that argument as well.”

Choudary says his group is merely following core Islamic teachings and that Islam is much more than a religion.

“This particular belief is more than just a religion,” he declared. “It is not just a spiritual belief. It is, in fact, an ideology which you believe in and you struggle for and you are willing even to die for, because you believe in that: That is your whole life.”

Choudary seems to relish being called Great Britain’s “most hated man” and pledges to continue his rallies calling for the overthrow of the British system.