On Tuesday, just 36 hours after the House of Representatives voted, President Obama signed into law the massive health care reform bill. Despite its tremendous policy flaws, its lack of bipartisan backing, its widespread public disapproval and its egregious constitutional inadequacies, Obamacare is now the law of the land.

But we haven’t even seen the worst of it. The new bill is about to undergo so-called “fixes” via a reconciliation bill. “You may have thought it was impossible to make the policy and process of Obamacare even worse,” writes Heritage’s Conn Carroll. “But that is exactly what this reconciliation bill does.”

According to a new analysis from Americans for Tax Reform, over the course of a decade, the reconciliation bill will add an estimated $52.3 billion in new taxes. These taxes will be levied against employers, the sick, low-income and moderate-income workers, and just about everyone else, regardless of income. 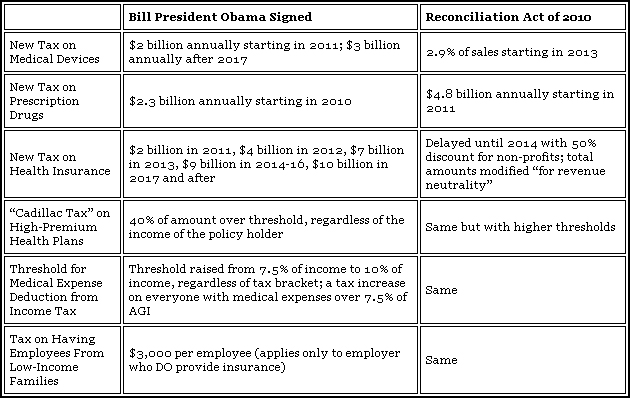 These so-called “fixes” are misnomers that actually fracture our economy further instead of repairing it. But even true fixes aren’t enough to correct Obamacare. As Sen. Jim DeMint (R-SC) pointed out: “This bill is unconstitutional and it cannot be fixed. It must be repealed.” The Heritage Foundation could not agree more.

On top of the harm to our economy and harm to our health care that Obamacare will inflict, this liberal success will only fuel the left’s agenda to push forward with cap-and-trade, amnesty for illegal immigrants, and other costly and harmful big-government proposals. These proposals would draw us further away from American principles like self-government and closer to a European welfare state.

“But don’t take our word for it,” writes Heritage’s Rory Cooper. “Here is audio of Congressman John Dingell (D-MI), a champion of [Obamacare] telling radio host Paul Smith on WJR in Detroit: ‘It takes a long time to do the necessary administrative steps that have to be taken to put the legislation together to control the people.'”

Our Founding Fathers established a limited government in order to protect our liberties—not to control the American people. When Patrick Henry famously exclaimed 235 years ago, “Give me liberty, or give me death,” he was making a statement hat has come to define our national character.

Patrick Henry’s sentiments remain very much alive today among the American people. Though under assault from the left, “the American love for liberty [that] prevailed in our founding will prevail once again,” writes Heritage President Ed Feulner in his response to Sunday night’s vote.

It is true that the passage of Obamacare opens the doors for the left’s radically progressive agenda. But it can also serve to remind Americans of the courage of our Founders as they fought government tyranny. This is especially important, Heritage scholar Matthew Spalding writes, as we “strive to revive our commitment to liberty and self-government.”

It’s not over yet!

Sean Hannity: ‘If You Look Up the Dictionary Definition of Socialism, This Is It’

By Terence P. Jeffrey, Editor-in-Chief (CNSNews.com) - In a preview of his book “Conservative Victory—Defeating Obama’s Radical Agenda,” due to...