As more Americans, especially the unemployed, come to rely on government to take care of them, we risk losing our independence. 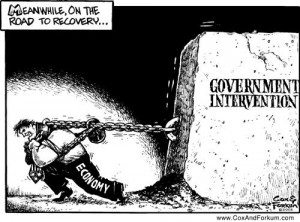 The Washington Times reports American reliance on government is at an all-time high. This is not our Founders’ America. We seem to have declined from a “can-do” spirit, to “can’t do” — at least without government — and soon, unless we change our ways, “won’t do.”

Our forebears practiced self-reliance, living within one’s means and helping neighbors. Much of our modern economy is built on overspending, satisfying desires, pretense, envy, greed and a sense of entitlement. Politicians who do not wish to disabuse us of such things keep seeking ways to prop up the falling house of cards. Who is brave enough to tell us we can’t go on living — and spending — like this?

Sen. Jim Bunning, R-Ky., has temporarily replaced Dick Cheney as the Darth Vader of America. His one-man blockade of unemployment and COBRA benefits stems from his belief that we can’t keep spending money we don’t have and that any extension of unemployment benefits should be paid for. Big media and liberal Democrats, many of whom denounced the far smaller Bush administration deficits, pilloried him. Having made his point on fiscal responsibility, late Tuesday, Bunning agreed to allow a vote on extending unemployment benefits, highway construction funding and spending on other federal programs. In return, Senate leaders agreed to allow votes on amendments Bunning will introduce to cut enough spending in other areas to pay for it all.

In The Washington Times story, Harm Bandholz, an economist at Unicredit Markets, told writer Patrice Hill that our massive shift from self-reliance to dependence on government may have been essential in order to have promoted last year’s economic revival, but he says it has merely delayed an ultimate day of reckoning for consumers “who went too far into debt to maintain their lifestyles during the boom years.” This is not only the story of many individuals, but the story of state and federal governments that go on spending sprees during the good times and hike taxes and engage in “painful spending cuts” during lean years.

But back to Bunning’s point, a point made by Democrats when they invoke “pay-go,” by which they mean new spending must be paid for (but not old spending), either with tax increases or spending cuts, which never seems to quite work out. The best we can hope from politicians is for them to cut rates on spending increases. Even that is criticized when Republicans try it. “What about the children?” is the predictable and phony lament.

“We were neck deep in the big muddy,” sang Pete Seeger about the Vietnam War, “and the big fool said to push on.” The Obama-Reid-Pelosi wing doesn’t care how high the water or how deep the mud. They’re pushing on toward more debt and greater dependence on government. When Bunning says we can’t, or we’ll sink, he is vilified. Those who wrongly told us we could ford this river of debt — Democrats and Republicans — should be the ones taking heat. Ultimately, though, too many of us got ourselves into the muck because we believed the advertisers and marketers — and politicians — confusing real needs with wants.

The more we come to rely on government, the fewer freedoms we will enjoy. Government will start dictating what we can own, eat and drive, how much of our money they will let us keep, how we run our businesses, how many — if any — guns we can own, and what we may and may not say. Oh, wait! They are already doing that.

To preserve freedom we must fight for it. Bondage comes when we refuse to fight and are satisfied with the king’s largesse. That foul odor coming from Washington is the frog in the kettle coming to a boil.

In Case You Missed It:  More Taiwanese now dying from covid VACCINES than from covid itself... meaning Big Pharma is more dangerous to Taiwan than the CCP
Posted in Freedoms and tagged Freedom, United Socialist States of America.

Posted by Erick Erickson Updated: As the night goes on speculation has moved to the guy smoking on the plane...