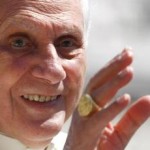 The Sunday Times newspaper says the two men have retained lawyers Geoffrey Robertson and Mark Stephens to prepare a justification for action, on the grounds that the pope was involved in covering up sexual abuse by Roman Catholic priests.

“There is every possibility of legal action against the Pope occurring,” Stephens told the Times. “Geoffrey and I have both come to the view that the Vatican is not actually a state in international law. It is not recognised by the UN, it does not have borders that are policed and its relations are not of a full diplomatic nature.”

Pope Benedict is planning a four-day visit to Scotland and England in September.

The Sunday Times quotes Dawkins as saying: “This is a man whose first instinct when his priests are caught with their pants down is to cover up the scandal and damn the young victims to silence.”

In Case You Missed It:  Here are 7 signs you're AGING faster than you should be and what you can do to address them
Posted in Freedoms and tagged Europe, Freedom.

Interest Rates Have Nowhere to Go but Up

Even as prospects for the American economy brighten, consumers are about to face a new financial burden: a sustained period...