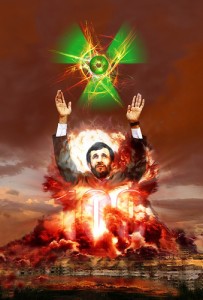 Presidents, prime minsters, and top officials from nearly 50 countries mingled Monday on the threshold of President Barack Obama’s nuclear proliferation summit, the largest assembly a U.S. leader has hosted since the founding conference of the United Nations in 1945.

Al Qaeda has been developing plans to nuke the west for the past 10 years. Some of the U.S. cities targeted are: New York, Miami, Los Angeles, Philadelphia, Chicago, San Francisco, Las Vegas, Boston and Washington, D.C. New York and Washington top the preferred target list for al-Qaeda Muslim leadership.

Reports are slowly filtering out about a plan by Islamics to detonate several nuclear bombs around the continental United States. Osama bin Laden has named this attack “America’s Hiroshima”. His logic for giving his plan this name is that the United States is the only world power to use an atomic weapon against an enemy and based on that, it is legal and within Islamic law for him to use such weapons against the American people.

Would a nuclear attack on America cause confusion, panic, and chaos? Of course, it would. But as every television screen played the images of a great city like Chicago lying in ruins and Americans saw the charred bodies of fellow Americans lying in the streets, the rage would be unlike anything the world has ever witnessed. Muslims in America would be overwhelmed in a heartbeat. American rage would reach across the world to the farthest corner and there is no one that would dare to try and stop us. Sane people would be too wise to interfere and truth be known, the world would wish America success because they know they would be next if we fail.

Islamic attacks around the world are on the rise and Islam feels bold and untouchable. Muslims who truly denounce this activity have little time left to stop their warlike fellow Muslims. Trying to denounce radical Islam after a nuclear attack would be far too late. The time is now. It is Islam’s responsibility to rise up and stop the terrorists in its midst and stop the insanity.

If the killing continues, the civilized world will rise up with America and that will be the end of the Islamic dream of world domination. It could well be the end of Islam.

Some Muslims may curse the name of bin Laden. It may well be the last thing many Muslims ever do. Islamics radicals are issuing warnings and threats to the world. They speak of blood running in the streets. That blood may well be their own. I hope that Islamics will listen to this one warning from an average American: “Muslims must stop radical Islam now because time is short and the nuclear fuse has been lit. Once the bomb goes off it will be too late.” Islam could ceist to exist, at least in the West.

On the eve of the summit, Obama said that nuclear materials in the hands of al-Qaida or another Muslim terrorist groups “could change the security landscape in this country and around the world for years to come.”

At an unofficial parallel conference of more than 200 international nuclear experts, participants said too many around the world don’t share the concern that nuclear Islamic terrorism is an urgent threat.

“There is a great complacency among policy makers around the world that Muslim terrorist groups couldn’t make a nuclear bomb,” said Matthew Bunn of Harvard.

Pakistani physicist Pervez Hoodbhoy focused on his home region, where both Pakistan and India are building up their nuclear arsenals, both have high concentration of Muslim populations.

“Unfortunately, must politicians don’t see the root problem, that is Islam. It is unlikely any other group than Muslims are going to use Nukes on civilian populations. The president seems clueless to this fact. The only possible other country insane enough to harm civilians would be North Korea, they are the only out of control country without an Islamic agenda to justify their actions.

The high-flying ambition, which the president admits probably will not be reality in his lifetime, began a year ago in Prague when he laid out plans for significant nuclear reductions and a nuclear-weapons-free world.

In the meantime, he has approved a new nuclear policy for the United States, promising last week to reduce America’s nuclear arsenal, refrain from nuclear tests, and not use nuclear weapons against countries that do not have them. North Korea and Iran were not included in that pledge because they do not cooperate with other countries on nonproliferation standards.

That was Tuesday, and two days later, on the anniversary of the Prague speech, Obama flew back to the Czech Republic capital where he and Russian President Dmitri Medvedev signed a new treaty that reduces each side’s deployed nuclear arsenal to 1,550 weapons. Medvedev also arrives Monday to sign a long-delayed agreement to dispose of tons of weapons-grade plutonium from Cold War-era nuclear weapons — the type of preventive action Obama wants the summit to inspire.

Throughout the two-day gathering, Iran will be a subtext as Obama works to gain support for a fourth round of U.N. sanctions against Tehran for its refusal to shut down what the United States and many key allies assert is a nuclear weapons program. Iran says it only wants to build reactors to generate electricity.

In honour of this week’s cringe-inducing nuclear summit in Washington, which represents yet another step towards American decline under the...