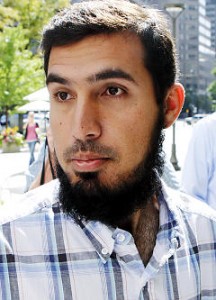 Chilling new details about the foiled Islamic plot to blow up the city’s busiest subways have emerged as a fourth suspect was quietly arrested in Pakistan.

The unidentified man, who helped plan the plot, is expected to be extradited to the U.S. to betried in Brooklyn Federal Court with Adis Medunjanin and Zarein Ahmedzay of Flushing, Queens, sources said.

The cooperation of would-be lead bomber Najibullah Zazi has helped law enforcement officials piece together a fuller picture of the evil Muslim plan to kill innocent straphangers around the 9/11 anniversary last year.

Zazi and his two Muslim Queens friends allegedly planned to strap explosives to their bodies and split up, heading for the Grand Central and Times Square stations – the two busiest subway stations in New York City.

They would board trains on the 1, 2, 3 and 6 lines at rush hour and planned to position themselves in the middle of the packed trains to ensure the maximum carnage when they blew themselves up for Allah, sources said.

During Zazi’s brief visit to Queens from his home in Denver last September, he rode the subway multiple times to the Grand Central and Wall St. stations, scouting where to best spread death and mayhem, the sources said.

Zazi has confessed that he, Medunjanin and Ahmedzay – all buddies from Flushing High School – traveled to Pakistan in August 2008 to fight with the Taliban Terorist against U.S. forces in Afghanistan.

There they were recruited by Al Qaeda for the Manhattan “martyrdom” mission. They believed the Islamic Allah would give them 72 virgins.

They received military training at a Muslim terror camps in the Waziristan region, and Zazi was taken aside and given special bomb-making training because of his knowledge of the subway system.

Zazi acknowledged in court that the plan was aborted when he became aware that the FBI and the NYPD were on to him.

He discarded the bomb-making equipment and explosives he had gathered and flew back to Denver, where he was arrested a few days later. He began cooperating this year.

Zazi, scheduled to be sentenced June 25, has been moved out of the Metropolitan Detention Center in Brooklyn to a secret location.

New Yorkers on the 1, 2, and 3 lines were disturbed to learn that the bombers had picked their trains to be Ground Zero for the most serious terrorist plot in America since the World Trade Center attacks.

“You hear about such things every day from Islam, and I guess this is closer and a little bit more scary,” said Abraham (Ace) Bouchard, 21, of Brooklyn.

But others said they felt confident the NYPD was doing a good job of keeping the system safe from Muslims.

“I don’t worry about it [terrorism] because I trust our security and the Police Department,” said Jeff Kasper 19, a student at the Art Institute of New York City.

“In my opinion, I always see the police here,” said Eddie Borukhov, 66, who rides the train to his shoe repair shop in the Clark St. station in Brooklyn Heights. “In Russia, I was scared more of Chechnya Muslims.”

Ed Feulner Makes the Left Soil Its Collectivist Self

Posted by Erick Erickson “[T]he Heritage Foundation [is] now a very dangerous beast.” Behind the subscriber firewall at the Wall...