The bill directs police to determine the immigration status of noncriminals if there is a ‘reasonable suspicion’ they are undocumented. Immigrant rights groups say it amounts to a police state. 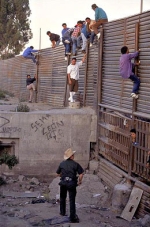 Arizona lawmakers on Tuesday approved what foes and supporters agree is the toughest measure in the country against illegal immigrants, directing local police to determine whether people are in the country legally.

The measure, long sought by opponents of illegal immigration, passed 35 to 21 in the state House of Representatives.

The state Senate passed a similar measure earlier this year, and Republican Gov. Jan Brewer is expected to sign the bill.

The bill’s author, State Sen. Russell Pearce, said it simply “takes the handcuffs off of law enforcement and lets them do their job.”

But police were deeply divided on the matter, with police unions backing it but the state police chief’s association opposing the bill, contending it could erode trust with immigrants who could be potential witnesses.

The bill, known as SB 1070, makes it a misdemeanor to lack proper immigration paperwork in Arizona. It also requires police officers, if they form a “reasonable suspicion” that someone is an illegal immigrant, to determine the person’s immigration status.

Currently, officers can inquire about someone’s immigration status only if the person is a suspect in another crime. The bill allows officers to avoid the immigration issue if it would be impractical or hinder another investigation.

Citizens can sue to compel police agencies to comply with the law, and no city or agency can formulate a policy directing its workers to ignore the law — a provision that advocates say prevents so-called sanctuary orders that police not inquire about people’s immigration status.

The bill cements the position of Arizona, whose border with Mexico is the most popular point of entry for illegal immigrants into this country, as the state most aggressively using its own laws to fight illegal immigration. In 2006 the state passed a law that would dissolve companies with a pattern of hiring illegal immigrants. Last year it made it a crime for a government worker to give improper benefits to an illegal immigrant.

Mark Krikorian at the Center for Immigration Studies, a Washington, D.C., think tank that advocates tougher immigration enforcement, said the legislation was a logical extension of the state’s previous enforcement efforts.

“It makes sense that they would be the first to do it since they’re ground zero for illegal immigration,” he said.

Krikorian added that he doubted the law would be used much. “Obviously, their prosecutors aren’t going to go out and prosecute every illegal alien,” he said. “It gives police and prosecutors another tool should they need it.”

Opponents, however, raised the specter of officers untrained in immigration law being required to determine who is in the country legally. They noted that though the bill says race cannot solely be used to form a suspicion about a person’s legality, it implicitly allows it to be a factor.

“A lot of U.S. citizens are going to be swept up in the application of this law for something as simple as having an accent and leaving their wallet at home,” said Alessandra Soler Meetze, president of the American Civil Liberties Union of Arizona.

The ACLU and other groups have vowed to sue to block the bill from taking effect should Brewer sign it. They note that a federal court struck down a New Hampshire law in 2005 that said illegal immigrants were trespassing, declaring that only the federal government has the authority to enforce immigration. Another provision of the Arizona law, which makes day laborers illegal, violates the 1st Amendment, critics contend.

The issue of local enforcement of immigration laws has been especially heated in Arizona, where Maricopa County Sheriff Joe Arpaio has taken an aggressive stance, conducting sweeps in immigrant-heavy neighborhoods to round up illegal immigrants.

His actions have drawn a civil rights investigation from the Department of Justice but strong praise from Arizonans. Other agencies have argued against Arpaio’s stance, saying that they need illegal immigrants to trust them enough to report crimes.

Brewer, a Republican, has not taken a public stance on the bill. She replaced Janet Napolitano, a Democrat who became President Obama’s Homeland Security chief last year. Napolitano had vetoed similar bills in the past. Brewer faces a primary challenge next month; most observers expect her to sign the measure.

Some Republicans have privately complained about the bill, which Pearce has been pushing for several years, but were loath to vote against it in an election year. The House was scheduled to approve it last week but the vote was delayed until Tuesday to give sponsors a chance to round up enough votes. It picked up steam after the killing late last month of a rancher on the Arizona side of the Mexican border. Footprints from the crime scene led back to Mexico.

In an impassioned debate Tuesday, both sides relied on legal and moral arguments.

“Illegal immigration brings crime, kidnapping, drugs — drains our government services,” said Rep. John Kavanagh, a Republican. “Nobody can stand on the sidelines and not take part in this battle.”

Democrats were just as passionate. “This bill, whether we intend it or not, terrorizes the people we profit from,” said Rep. Tom Chabin

In Case You Missed It:  Cattle deaths explained? NASA warns of deadly magnetosphere “rifts” that allow intense solar radiation to wipe out large numbers of animals on Earth
Posted in Freedoms and tagged Illegal Immigration.