The Securities and Exchange Commission on Friday charged Wall Street’s most gilded firm, Goldman Sachs, with defrauding investors in a sale of securities tied to subprime mortgages. 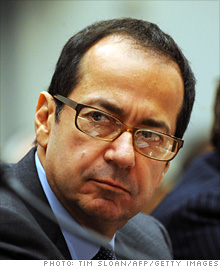 The SEC said it charged New York-based Goldman (GS, Fortune 500) and a vice president, Fabrice Tourre, for their failure to disclose conflicts in a 2007 sale of a so-called collateralized debt obligation. Investors in the CDO ultimately lost $1 billion, the SEC said.

The SEC’s civil fraud complaint alleges that Goldman allowed hedge fund Paulson & Co. — run by John Paulson, who made billions of dollars betting on the subprime collapse — to help select securities in the CDO.

Goldman didn’t tell investors that Paulson was shorting the CDO, or betting its value would fall. When the CDO’s value plunged within months of its issuance, Paulson walked off with $1 billion, the SEC said.

“The product was new and complex but the deception and conflicts are old and simple,” said Robert Khuzami, director of the Division of Enforcement for the SEC.

A Goldman spokesman didn’t immediately return a call seeking comment, but in a statement the bank said that “the SEC’s charges are completely unfounded in law and fact and we will vigorously contest them and defend the firm and its reputation.”

The shares of JPMorgan Chase (JPM, Fortune 500), Citigroup (C, Fortune 500), Morgan Stanley (MS, Fortune 500) and other big banks declined between 3% and 5%, as investors all over Wall Street heard the footsteps of an apparently revitalized federal law enforcement apparatus.

“This litigation exposes the cynical, savage culture of Wall Street that allows a dealer to commit fraud on one customer to benefit another,” Chris Whalen, a bank analyst at Institutional Risk Analytics, said in a note to clients Friday.

Khuzami said the case was the first brought by a new SEC division investigating the abuses of so-called structured products such as CDOs in the credit crisis. He said the investigation continues but declined to comment further.

“We continue to examine structured products that played a role in the financial crisis,” Khuzami said in a phone call with reporters. “We are moving across the entire spectrum of products, entities and investors that might have been involved.”

Khuzami said Paulson wasn’t charged because, unlike Goldman, which sold the securities to investors, it didn’t have a duty to fully disclose conflicts to other investors.

A CDO is a financial instrument backed by pool of assets, typically loans or bonds. In this case, the instrument in question is a so-called synthetic CDO — which is backed not by actual loans but by a portfolio of credit default swaps referencing residential mortgage-backed securities.

While many CDO deals performed poorly, particularly in the latter stages of the housing bubble, the Abacus CDO at the center of this case blew up particularly quickly.

Khuzami said the SEC is entitled to disgorgement of ill-gotten gains as well as penalties that will be considered “at the appropriate time.”

But it’s early yet to say whether Goldman will end up with any liability in the case, said Ron Geffner, a former SEC enforcement attorney who is now a partner with Sadis & Goldberg in New York.

He said the case would hinge on variables including the objectivity of the portfolio designer, what was communicated to investors, what fiduciary duties Goldman may have had and how sophisticated the investors were.

“There is some meat on the bone, but it’s too early to determine guilt,” he said.

In Case You Missed It:  Capital Gains Tax Increase is Bad. Here's Why
Posted in Financial and tagged Banking, Economy.

The al-Qaeda leader is using it as a platform to show videos and speeches to Islamic militants. His address is...